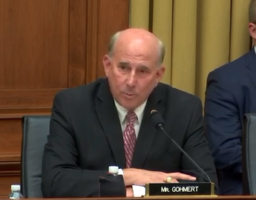 Congressman Louie Gohmert gives a statement about universal background checks and fees associated with those checks impacting low-income Americans from being able to protect themselves. Congressman Gohmert made extensive use of the CPRC’s research in his statement to the committee (see here and here).

Sexual assault survivor testifies about the dangers of Gun-Free Zones

Savannah Lindquist is a survivor of sexual assault on a College Campus and gives her testimony about what happened to her in a Gun-Free Zone while she was disarmed and unable to protect herself. She is referencing the CPRC’s research where she cites the information the rate that mass public shootings take place in gun-free zones.

Savannah also mentioned the CPRC’s Nikki Goeser during her testimomy to the House Judiciary committee.