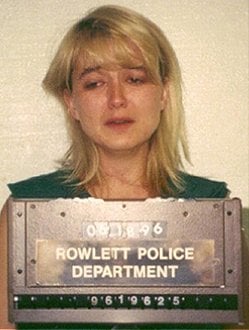 I am well aware that this case has probably been talked to death on the web, and yet here I am wanting to discuss it some more.

I watched the new 20/20 special that aired last night on Darlie and her boys. I’ve watched The Last Defense, YouTube videos, read the court transcripts,etc.. I still cannot say definitively that Darlie is guilty.

I do believe the media heavily influenced her trial. I also found myself thinking about how many people, even now, seem to be trialed by the media. The media holds SO much power. We have seen people convicted based on media and we have seen innocent people released thanks to them. Kind of off topic, but I have to wonder if the WM3 would have gotten out of prison if it weren’t for the press and celebrities drumming up so much interest. How much power is too much power? Are you innocent until proven guilty or are you guilty until your innocence is proven? I think the media has a LOT to do with this trend.

–Darin admitted in the special last night that he only signed an affadavit regarding his “thinkcrime” to burgle their home because he thought it would cast doubt and help Darlie’s case.

–Something that always gives me pause is the part in the 911 call where she is heard saying, “I swear!” to Darin. As in, from my perspective, trying to utterly convince him that someone else was in the house and did commit this crime. Now, I don’t know about you guys but if I had just been through what Darlie went through, and my husband came running down the stairs, my last thought would be to try and persuade my husband that I didn’t kill the kids. It would never occur to me because I know without a doubt that my husband wouldn’t suspect me in that scenario. Why did Darlie feel as though Darin suspected her in that moment?

–Another thing, police made a big deal that climbing out of the window would have meant that the mulch would have been disturbed. But the mulch was undisturbed and they say that proves that nobody climbed in and out of that window.

The problem is, 20/20 showed last night that there was not mulch under that window. It was concrete. The mulched section of their yard was several feet away from the window. So, the point they made in trial about the mulch was just not correct.

I could write pages on this case, but I’m not going to because I am sure most of you here in this sub are familiar enough with the case, but if not, here are some links:

Can we please discuss this case?