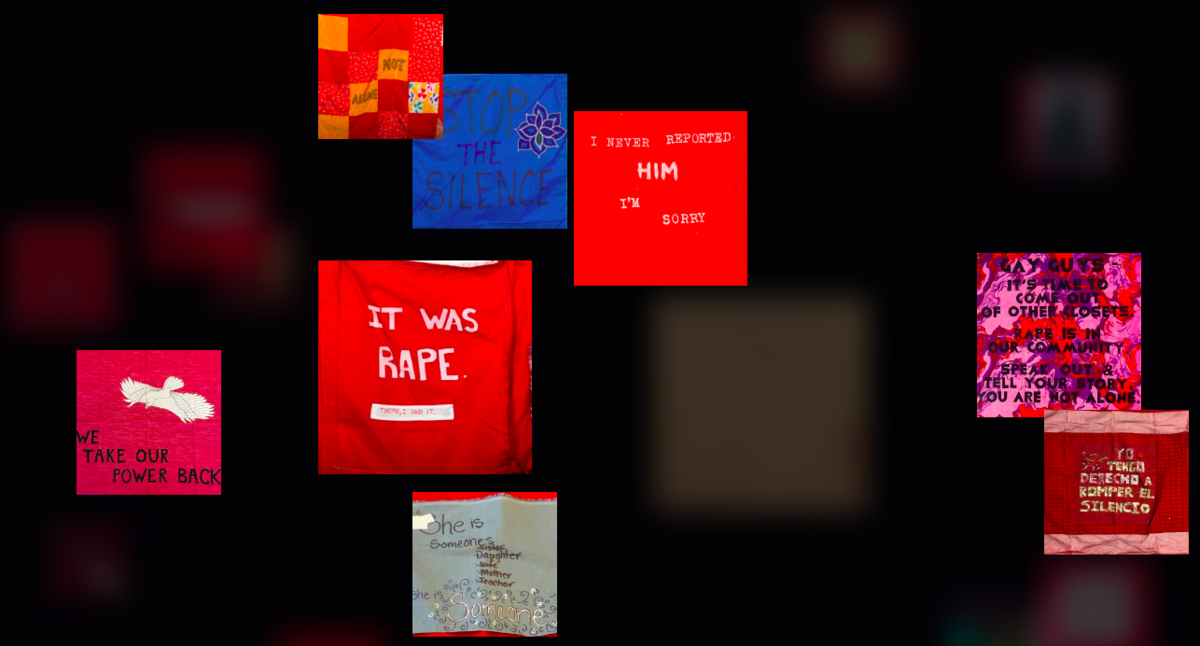 Natalie Martinez was still a teenager when a stranger touched her without her consent.

It took her a year and a half before she was able to add a quilt square to thousands of others sewn by people who have been affected by sexual violence. Written, drawn and stitched into fabric, the squares contain the personal stories of survivors, and together make up the Monument Quilt. On May 31 the result—more than 3,000 pieces that have never before been displayed in their entirety—will spread across the National Mall in Washington, D.C.

Martinez, now 21, said she drew strength from the messages of support she read in the other pieces of the quilt, in hopes of helping others struggling with similar experiences. “I wanted to be able to share my own story,” she said. “Maybe it would in a way mean something, provide meaning to somebody else.”

Six years ago, members of the artist collective FORCE began to collect stories from survivors of sexual abuse, and the quilt squares have been piling up in a Baltimore warehouse since. By displaying them in one of the country’s most public spaces, members of FORCE hope to recognize these often unseen and unaddressed experiences. Weighing in at over 50 tons, the quilt will cover an area of the Capitol lawn the size of a football field.

“This project was dreamed up during the Obama administration,” said Liz Ensz, who began volunteering with the collective in 2014 and is now part of the leadership team. “Just thinking of who’s in the Oval Office now, putting this on his front lawn is also really important.”

Ensz, like all the staff of FORCE, is a survivor. Ensz said making a square helped put a name to what they are now able to understand as abuse. “I think a lot of people hadn’t named their experiences as rape or assault before because it wasn’t a stranger in a dark alley. It was someone they knew,” Ensz said. “It’s about presenting these other narratives that men can be survivors of rape and sexual assault, women can be perpetrators, any story can exist. There’s not just one narrative.”

Part of FORCE’s outreach is aimed at helping those especially vulnerable to abuse—young adults and children. While it is not known how many of the pieces of the quilt were submitted by young adults, staff members said they have seen many squares describing experiences from childhood and teenage years.

Original analysis and perspectives from across the spectrum on criminal justice

18-year-old Marquart Dody worked with the group to develop programming aimed at helping teenagers protect themselves, and each other. She said she joined the youth efforts after being disturbed by what she witnessed in her middle and high schools. “My involvement with it has a lot to do with seeing rape culture in schools,” said Dody. “And wanting to disrupt it.”

Tracy started dating a boy when they were in middle school. Shortly after the relationship began, she said he started pressuring her for sex. It eventually escalated into him forcing himself on her, more than once.

“I was 13 or 14,” said Tracy, who asked to be identified only by her first name because she has not publicly disclosed her assault. “I didn’t really know that it was a sexual assault that happened, because I was in a relationship with the person. And I thought that meant they could do whatever they want.”

Tracy, who is Chinese, said she never told her parents about what happened because of the family’s strict rules against dating. “The culture that I come from is not very open, and so I felt like there wasn’t really anyone I could go to.” she said. “I never would have been able to talk to my mom about what happened.”

For Tracy, being unable to talk about her experience made it even harder. Now 22, she said making a square for the Monument Quilt was the first time she was able to understand her experience as a sexual assault. “Before that, I never really processed or acknowledged what happened,” she said. “I consider that my first real recognition.”