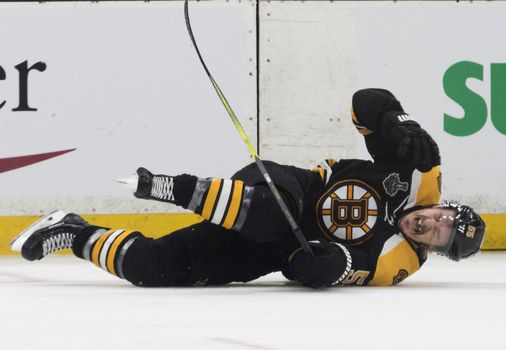 That decision had everyone with an affinity for or an affiliation with the Bruins up in arms. Disbelief filled the silence where the sound of a whistle and the announcement of a penalty should have been.

“Yeah, it should have been a penalty for sure,” said Bruins defenseman Torey Krug, on the ice for the fateful non-call. “Anytime it leads to a scoring chance for the opposition, it’s got to be blown down. It’s got to be called. I’m all for letting plays go and playing hard, even the one at the end of the second there. They get a scoring chance out of it because [Oskar Sundqvist] is holding my arm.

That’s hard to do considering Thursday night’s heist could be the final game on Causeway Street this season. The dubious goal looms as the difference in a pivotal fifth game — and potentially the series.

Officials in all sports have a very difficult job. They’re like the boiler unit in your basement. When they’re doing their job, you don’t even notice them. When you do notice them, that means something has gone horribly awry, as it did last night.

Players and coaches can choke under pressure — so can officials. This is every North American sports league’s worst nightmare.

The Bruins tried to take the high road, saying they had to move on, lamenting being held scorless until Jake DeBrusk halved a 2-0 disadvantage with 6:28 to play. But the no-call that led to the goal was the difference.

Bruins coach Bruce Cassidy called it “egregious” and could barely contain his emotions.

“What was being said [on the bench] was he missed an effing call . . . for obvious reasons,” said Cassidy. “But after that, we had to settle down and play. Listen, we thought we got screwed, but you got to keep playing. We did. We scored the next goal and gave ourselves a chance to win. We tried to rally around that. . . . I thought we responded well.”

They responded better than the incensed Spoked-Believers who delayed the game, pelting the ice with water bottles and rally towels. Bruins president Cam Neely, celebrating his 54th birthday, was captured on television flinging a water bottle in disgust in his suite.

To reconstruct the crime: Acciari had the puck in his zone by the boards with his back to his own net. Bozak leg-whipped Acciari, knocking him to the ice and knocking the puck free. Acciari remained on the ice in pain. Bozak stopped, seemingly to plead his case for the ensuing penalty call in a one-goal game.

Except, that call never came. The Blues got the puck. Perron potted his own rebound, guiding it through Tuukka Rask for a 2-0 lead.

Adding injury to insult, Acciari headed back to the Bruins locker room for repairs, limiting the Bruins to 10 forwards since the team elected to go with seven defensemen as insurance for iron-willed defenseman Zdeno Chara, who bravely took the ice less than 72 hours after having his mouth mangled in Game 4.

“They score a goal off it. It ends up being the game-winner. It’s just embarrassing,” said a soft-spoken Acciari, who said he would be ready for Game 6.

Adding to the sense of injustice was that with 13 minutes left in regulation, there was a replay review to see if David Pastrnak pushed the puck and Blues goalie Jordan Binnington across the goal line, as he whacked away at both. After deliberation, the no-goal call stood. The Bruins would have to find their equalizer and their salvation elsewhere.

The Bruins responded with an odd-angle goal from DeBrusk to put pressure on St. Louis the rest of the way, but the damage was done. A goal that will live in Boston sports infamy, and was so egregious and unjust the opponent should have been the Montreal Canadiens and the setting the old Montreal Forum .

Krug was asked if the officiating in the series had changed since Craig Berube went full Phil Jackson Zen Master to psyche out the officials and alter the tenor of the series following his team allowing four power-play goal in losing Game 3.

Krug was succinct, decisive, and accurate, unlike the men in stripes on this night.

The reality is that coaches and players are accountable to the public for their performance on the ice. The same should be true of on-ice officials. Instead, the statement offered by the NHL’s officiating boss was the sports equivalent of Russia’s TASS news agency offering an official account of an election.

“We don’t make comments on judgment calls within games,” said senior vice president and director of officiating Stephen Walkom via a pool reporter. “There are hundreds of judgment calls in every game. The official on the play, he viewed it and he didn’t view it as a penalty at the time.”

Just because the NHL said there was no penalty that doesn’t erase reality. You don’t even have to be able to skate to know that was an infraction.

This is exactly the type of controversy the NHL doesn’t want on its hands in its signature event. Nothing to see here, says the NHL.

The reality is that the Bruins don’t have just the officials to blame for their 3-2 deficit in the series. They need to play better and heavier 5-on-5, and turn scoring chances into goals. The shots were 24-12 with 4:17 left in the second period, but the Bruins were still goal-less. They out-shot St. Louis, 39-21, for the night.