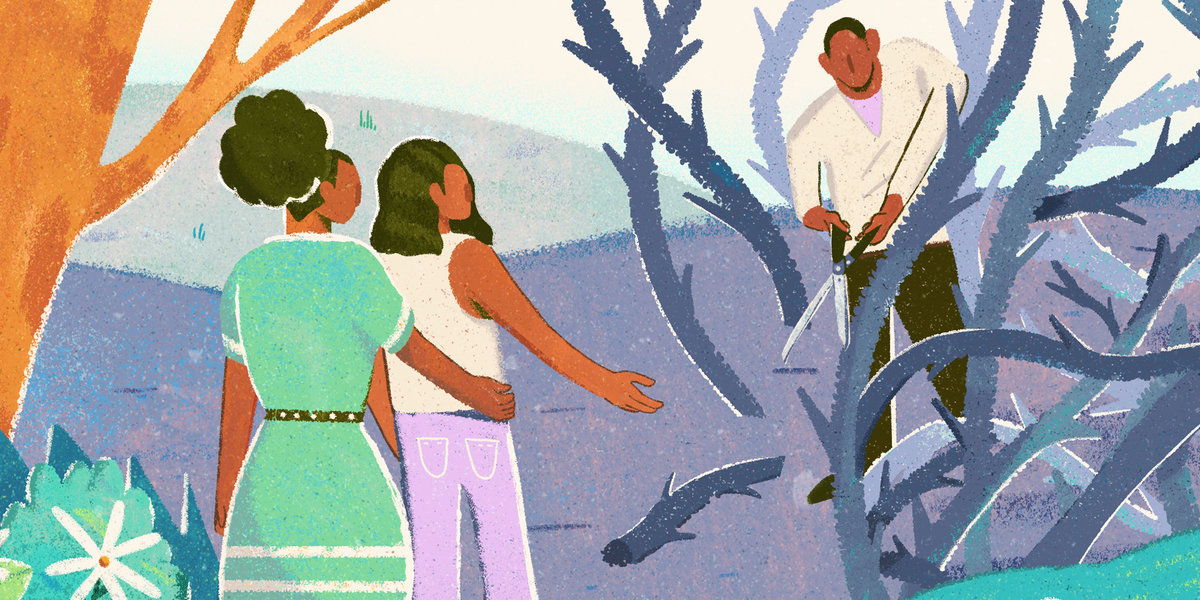 Perspectives from those who work and live in the criminal justice system.

Editor’s note: This week, we’re running a special Life Inside series about fathers and incarceration. Read the previous essays about next-cell neighbors, dancing in the prison gym, a surprise meeting and a friend who became family.

When I was in prison, I was so incredibly desperate to be with my children.

I’d lie in bed at night, and remember how happy my older daughter was at her graduation from Head Start, and how, when she recognized me in the crowd, she ran over and jumped in my arms. I’d remember when my younger daughter was changing from a baby into a toddler and we’d go for walks down our street. She would grab my pinky, and we’d walk at a turtle’s crawl, and when we’d pass the house with the dog in the backyard, she held my hand tighter.

Prison is stone and metal, and you’re not supposed to have a whole lot of feelings. Guys who are soft get extorted. But at night, when I was left alone with my mind, my memories of my daughters penetrated that numbness—a combination of good and grief. There was so much regret, such a feeling of helplessness, not to be able to hold my kids in those moments. But it reminded me that whatever I was going through, I had to go through, so I could get back to my children.

My older daughter was 10 when I was incarcerated, and my younger daughter, 7. The former lived a few hours away and didn’t like visiting prison, so I only saw her occasionally. But the younger one lived only an hour away, and her mother brought her once a week. I felt constant guilt that that’s what Sundays were going to be like for them for years. But I also felt lucky. Many fathers didn’t have that.

When she was younger, we’d play dolls and Apples to Apples. We’d play a board game called Swan Princess that came with wands and tiaras. Hell yeah, I wore a tiara! If that’s what it took to be a whole human.

Sometimes when we were having the most fun, my daughter would ask me, “When are you coming home?” When it was time to say goodbye, she’d ask, “Are you coming with us this time?” I was sentenced to a mandatory minimum, so I knew I was going to be there for my full complement of time: 5 years and 10 months. But I couldn’t let myself feel the full weight of our separation, because, after visiting, I had to go back into the prison. So I’d just tell her, “I’m in timeout now. I’ve got more time in timeout.”

After I’d been incarcerated for about a year and a half, I started attending a program for incarcerated parents called Parenting Inside Out. It gave me a chance to work on my relationship with my daughters even though I wasn’t with them.

There were 10 to 12 fathers in the class, and it’s funny: we first started to have a sense of solidarity as a group when we got to arguing with the parenting coach. We were skeptical of things like “timeouts,” which seemed too much like “parenting white.” After class, we’d say to each other, “Man, that was some bullshit.”

But we were also listening.

We really listened to the lesson about love languages—things like giving affirmations and undivided attention to your loved one. We paid attention to the lessons on communication, too: how to hear someone without reacting, and how to speak about our own feelings of hurt or fear instead of acting on them or blaming the people we love. We wouldn’t tell the coach, but sometimes, after class we’d tell each other, “Oh my God, it worked.”

I came to realize how little give there was in my own parenting. I always thought I’d be a better dad than my own dad, and I was. I never hit my kids. I didn’t yell to get attention. But I was still the kind of parent who would say, “If your room isn’t clean, if your homework isn’t done, you can’t go anywhere.” I was taught to be a man of my word, and I expected the same of my children. But that attitude can be oppressive when a child doesn’t have the skills or development for it.

I thought about my own childhood. My dad was very absent, and when present, very strict. My mother had a fear for my safety as a young man of color in a predominantly white town, and her fear manifested itself in harshness. Both my parents were alcoholics. I spent a couple years in foster care, where I was mistreated and developed a nervous twitch. I was returned to my mother. But later addiction returned, and my parents succumbed to crack. When I was 16, the police came to our door and let us know that our mother had been murdered.

Over time, as the parenting group in prison began to be more open and vulnerable, our childhood traumas, and being able to overcome those traumas so as not to continue them with our own kids, became the number-one topic we talked about, regardless of the communities we came from. What we wanted most was for our children to know that we loved them, even if we didn’t always have the language to say so, or the emotional capacity to show it. I believed that when I got out, I’d have what I needed to be the parent I wanted to be.

I was wrong, at first.

When I got out of prison, I moved back in with my partner and my younger daughter. But at first I couldn’t find work, and then the only work I could find was physical labor, like laying pavement. The crews were all guys out of incarceration. The attitude felt like, “We’ll use up your bodies and then we’ll find someone to replace you.”

Every time I heard a siren, I’d feel anxious, even if I didn’t show it. I still ate with my back to the wall, and the guilt I lived with was intense.

My grandma died unexpectedly, and she was my best friend. I was unsure of my worth. Sometimes I thought it would be better for everybody if I just “hung up the phone.”

While I was dealing with all of this, I also had a teenager in my home, now, who’d learned the art of talking back. For months, my daughter and I had been arguing over how long it took her to clean up her room.

One day, probably about a year after I’d gotten out, we started arguing again. We were standing between her bedroom and the bathroom when I heard her say something under her breath. I faced so much disrespect out in the world, and I decided that the disrespect in my own home had gone on long enough. My voice was loud and deep when I got in her face. I said, “You may do that with your mom, but you’re not going to do that with me.” And I continued until I was done.

And then I looked at her, and I saw in her eyes that she was afraid of me.

This was not okay, I realized. But having gone through the class taught me that parenting is skill-based. I was struggling as a parent because I needed more skills, not because I was simply a poor parent.

I started talking with dads in another class I’d been mandated to attend. I found people at church. I connected with a counselor who became a mentor. I learned skills from my own community and from other communities. I pulled out tools from the prison class that I’d let lie dormant. I tried stuff I never thought I’d try, like meditation. And I came to understand that as parents, we’re always evolving because our children are always evolving in a world that’s always evolving, and that the best way is just whatever way that works.

Now I work for Parenting Inside Out as the Program Manager. I go back to prisons to support families and parents going through the same curriculum I took. I bring my experience to the work.

My daughters are now 19 and 22. It’s still hard to feel like a good person when I’ve caused others so much pain. But I also feel like the happiest and healthiest parent that I’ve ever been. My children and I do a lot of talking these days, which usually means I do a lot of listening.

I know that even when a parent has been part of a child’s pain, that parent’s love can still be the antidote. That hope is what I want to give to all parents, especially those experiencing incarceration.

Richard Hines-Norwood, 46, lives in Portland, Oregon. He is the program manager at Parenting Inside Out at The Pathfinder Network, an agency that works with individuals and families impacted by the criminal justice system.