CHARLESTON, S.C. ― Joe Biden has gotten a lot of flack for his support of the 1994 crime bill, his signature legislative achievement in the Senate that has been blamed for an increase in the U.S. prison population.

But evidence suggests the decades-old law will be less of an issue for him as he continues to lead the race for the Democratic presidential nomination in the 2020 election.

Experts say the sprawling legislation, signed into law by President Bill Clinton, contributed to both a decline in crime and an increase in mass incarceration. It expanded the federal death penalty and created dramatically harsher sentencing laws, including a three-strikes provision that mandated life terms for people with at least three federal violent crime or drug convictions. It also gave states incentives to lock criminals up for longer periods of time and provided billions in funding for new prisons.

“Good people signed on to that bill. People make mistakes. But let’s hold them to that,” Sen. Cory Booker (D-N.J.), a 2020 rival, said in an interview with HuffPost last month. “That crime bill was shameful, what it did to black and brown communities like mine [and] low-income communities from Appalachia to rural Iowa. It was a bad bill.”

Biden has continued to defend the law, telling voters last month there were “a lot of the good things in the bill” (it also contained a ban on assault weapons and the initial version of the Violence Against Women Act). He said it “did not generate mass incarceration.”

Biden’s defense of the law doesn’t appear to be costing him support among African Americans, though. In South Carolina, where over 60% of Democrats are black, Biden holds a commanding 20-point lead over the rest of the crowded primary field, according to a recent poll.

Asked if he faulted Biden for his role in getting the 1994 crime bill through the Senate, Lee Moultrie, a black civil rights activist from Charleston, South Carolina, said, “Hell, no.”

“People made decisions based on the time,” Moultrie said. “You can’t come back 20 years later and say, ‘OK, you shouldn’t have done this.’ The information they had led them to make some decisions that they made. Now, we might see it might not be effective as we wanted it to be, and that it created some problems that we didn’t want to have, but we have to give that a pass.”

Standing in line to see several candidates address black economic issues at a presidential forum in Charleston over the weekend, Moultrie, who remains undecided in the election, argued that African American leaders and community members share some responsibility for not working harder to stop the law at the time.

“The black elected officials could have stood up. Everyone who had some concern, where were they at? The black fraternities, the black sororities, they could have stood up,” Moultrie said. “You can’t blame one person or the Congress, because you could be advocating against something if you don’t like it.”

The law was backed at the time by the Congressional Black Caucus as well as several big-city black mayors and clergy leaders who were alarmed at soaring crime rates across the country.

Sonya Fordham, a schoolteacher from Charleston who also attended the forum, said that Biden’s time in the White House as Barack Obama’s vice president outweighed his involvement with the 1994 crime law.

“I think people do change. Politics does make you change. This country is about change,” Fordham said, after stating her 2020 preference for Biden first and Sen. Elizabeth Warren (D-Mass.) second. “I think that he did a lot for me when he was No. 2 for Obama.”

She added: “It takes a lot for a white man to be second, OK? And that says a lot to me, right there.” 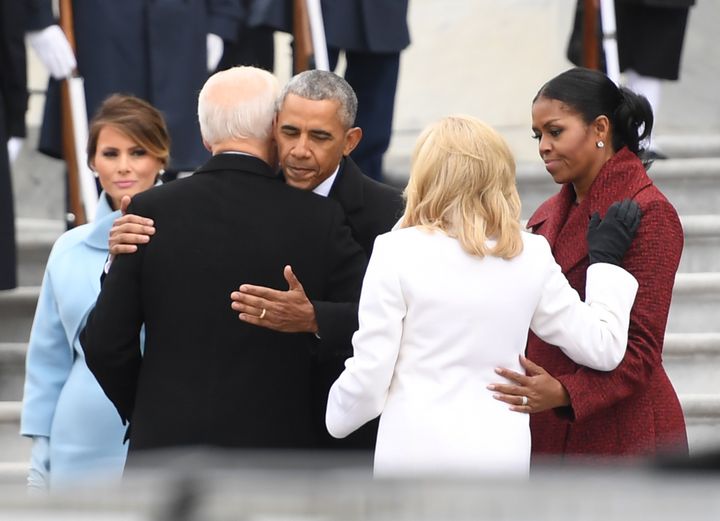 Another undecided voter, an African African man at the forum who identified himself only as Robert, also said Biden’s role in passing the ’94 crime bill shouldn’t bar him from the 2020 presidential nomination. But he did suggest that Biden ought to make clear where he stands now.

“I can’t fault the man for what he believes in,” Robert said.

While black voters in South Carolina were generally willing to give Biden a pass, some in Iowa said they would take the crime bill into consideration with other factors when making their choice for the Democratic nominee.

“He’s an interesting guy. He’s got a long history,” said Anthony Arrington, a 50-year-old black man who runs a professional and executive search and consulting firm in Cedar Rapids, Iowa. “Question is, is he somebody that people who look like me can trust? I think it comes down to trust. I’m not sure yet. But I think he’s very knowledgeable.”

The specifics of the crime bill, a new HuffPost/YouGov survey suggests, aren’t on many Democrats’ radar. Although 55% of Democratic voters say they’re at least somewhat familiar with the 1994 bill, just 1 in 10 are very familiar. Although their views about it are roughly split ― 28% approve, and 31% disapprove ― the largest bloc is the 41% who aren’t sure either way. Even among those who do hold an opinion on the bill, slightly less than one-fifth say it’s an issue that will be very important to their vote next year.

Many voters aren’t aware of which candidates were backers of the bill in 1994. (Sen. Bernie Sanders (I-Vt.) and Washington Gov. Jay Inslee (D) voted for the bill when they served in the House). Given a list of some of the top-polling Democratic candidates to choose from, just 30% of Democratic voters picked Biden as being among those who initially supported the crime bill, and only 12% named Sanders.

But the polling also gives a sense of just how much Americans’ way of thinking about crime may have shifted since the bill was passed more than two decades ago, and how unpopular a law-and-order approach is within the Democratic Party today.

Although the polling methodology is too different to allow for direct apples-to-apples comparison (among other things, the HuffPost/YouGov survey is conducted online, and gives respondents an explicit option to say that they’re unsure about questions), the results do suggest a fairly significant shift away from punitive measures. In a 1994 NBC/Wall Street Journal poll, Americans said, 58% to 29%, that better law enforcement and stricter punishment would be more effective in reducing crime, rather than more education and training to create better economic opportunities. In the HuffPost/YouGov poll, Americans favor education and training, 49% to 31%. Within the potential primary electorate, three-quarters of Democratic voters say they consider education and training a more effective approach than ramping up law enforcement and cracking down on offenders.

Democratic voters weigh against three-strikes laws by a considerably more modest margin, saying 42% to 31% that they oppose laws requiring life imprisonment for anyone convicted of three serious crimes, although more than a quarter are unsure.