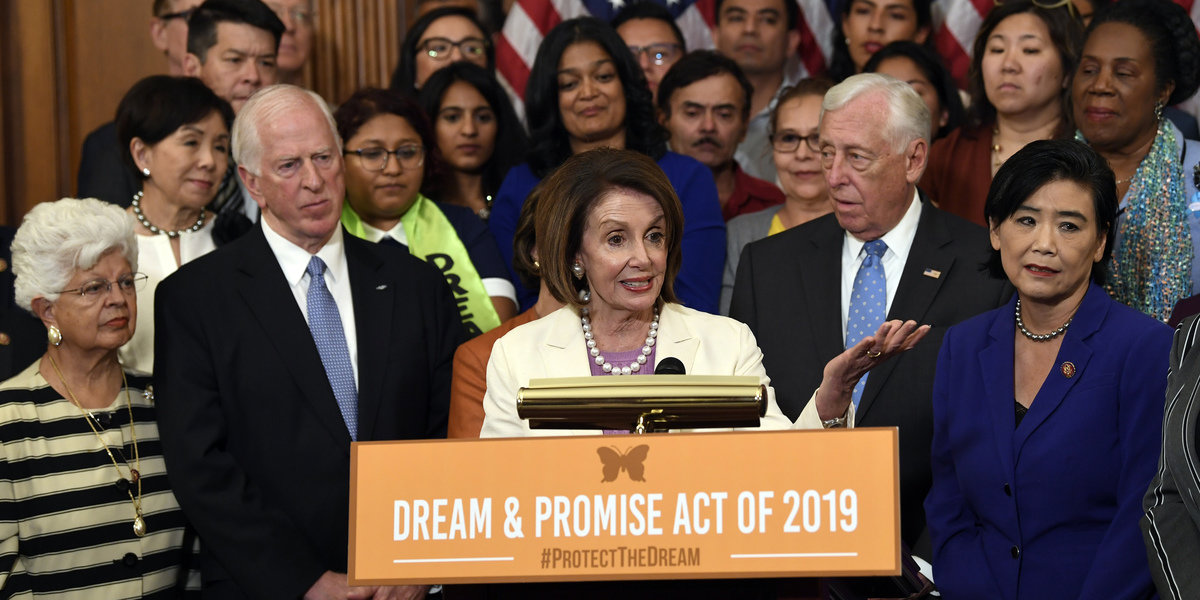 Earlier this month, with much fanfare, the U.S. House of Representatives passed its most significant immigration legislation in years, popularly known as the Dream Act. The bill, versions of which have been in the works for nearly two decades, would create a path to citizenship for Dreamers, the more than two million undocumented immigrants nationwide who were brought to the U.S. as children.

Yet because of a little-noticed late change to the bill, some youth advocates say, it would instead make a subset of Dreamers vulnerable to deportation. In many cases, it would bar them from legal status if a judge has ever sent them to a detention facility for a juvenile offense—even a minor one such as underage drinking or shoplifting.

In the past, Congress had only deemed adult criminal convictions to be legal grounds for denying someone protection from being deported. No law has ever before required immigration officials to also weigh immigrants’ juvenile records when they apply for asylum, visas or any other form of permanent residency status.

“It’s the whole reason we created a separate juvenile court system, because things you do as a child shouldn’t be held over you for the rest of your life,” said Marcy Mistrett, CEO of the Campaign for Youth Justice, an advocacy group.

The bill has little chance of making it through the Republican-controlled Senate, given that Majority Leader Mitch McConnell of Kentucky has called himself the “grim reaper” of Democratic legislation. But youth advocates say that even mentioning juvenile records in immigration law opens a Pandora’s box for vulnerable young people, and that passing the bill with such language will make it difficult to negotiate for anything better in the future.

The amendment was added at the eleventh hour in the House Judiciary Immigration and Citizenship Subcommittee, chaired by Rep. Zoe Lofgren, a Democrat from California, according to interviews with five senior Congressional aides and several youth advocates.

Some lawmakers had expressed concern that, given how President Trump and the Republicans have weaponized the imagery of youth gang members flooding into the country, moderate Democrats from red states would face re-election challenges if asked to vote for legislation that wasn’t clear about excluding immigrants with any kind of record.

“Gang issues are genuinely tough,” said Tom Jawetz, vice president of immigration policy at the Center for American Progress, who supported the bill even with the juvenile records amendment. “We had to address members’ legitimate concerns” or the proposal would have failed, he said.

“What’s being missed [by critics] is that this is a huge new legalization program for millions of people who don’t currently have any way to get permanent status in this country,” said Jawetz, the subcommittee’s former chief counsel. “That’s the bottom line.”

Congressional aides who worked to pass the bill said they made sure that the youth records language was crafted as narrowly as possible to sound tough while still ensuring that few Dreamers with nonviolent criminal histories would be prevented from winning legal status. The aides spoke on the condition of anonymity given the sensitivity of the negotiations.

Several Democrats, including Rep. Bobby Scott of Virginia, still objected to the change—and were successful in making a further amendment to protect some Dreamers with expunged juvenile records.

It’s unclear how many young immigrants would be excluded from the Dream Act’s protections, but youth advocates fear that Latino teens would be disproportionately affected because their communities are heavily policed.

Critics of the bill’s final language say it creates a false dichotomy between “good” and “bad” immigrants similar to that in the adult system, in which people who’ve lived in the U.S. for much of their lives have been deported for minor crimes they committed decades ago.

Opponents also say the legislation plays into the Trump administration’s narrative about youth crime, which is belied by facts: Teen arrest rates are at a three-decade low. Many young people held in juvenile-justice facilities are there for mental-health or drug treatment, and are often guilty only of age-based “status offenses” (truancy, breaking curfew, drinking underage, running away from home) or probation violations.

Critics also point out that the Dream Act, as it was written before this change, had already blocked people with felony convictions and most misdemeanors from earning legal status.

Some Democratic aides and youth advocates even expressed confusion about the strategy behind the late update to the bill, while acknowledging the challenges of getting anything passed in the current political climate. The Senate’s version—sponsored by Republican Sen. Lindsey Graham of South Carolina, hardly known for being soft on crime—doesn’t have the same provision blocking Dreamers with juvenile records, they point out.

“Precisely because this will be hard to pass in the Senate, that’s why I was excited for it to be as progressive as possible—to really set a marker,” said Julie Mao, an immigration attorney at Just Futures Law, a law and policy advocacy group. “But now we’ll have to negotiate with our own bill.”

Yet the practical difficulty of passing the Dream Act was the very reason why President Barack Obama had to go around Congress in 2012 to create the Deferred Action for Childhood Arrivals program, or DACA, which protected hundreds of thousands of Dreamers. Under that executive action, Homeland Security officials were in some cases allowed to consider juvenile records, but only if they felt the past offense made the young person a security threat.

In 2017, President Trump attempted to rescind DACA, only to be blocked in federal court; the case may be decided by the U.S. Supreme Court in the coming months. Meanwhile, he indicated that he might protect Dreamers if such a bill were bundled with funding for his border wall, although those negotiations have since fallen apart.

The version of the bill passed by House Democrats also allows Homeland Security officials to block some Dreamers from legal status if they have gang ties, which concerns youth advocates because such allegations are often based on scant evidence like being seen in a certain neighborhood wearing a certain color of clothing.

Supporters of the bill, though, point out that the Secretary of Homeland Security must personally review every case and prove with clear and convincing evidence that a Dreamer is an ongoing public-safety threat.

The legislation also provides for an appeal process, in which people denied protection are appointed a lawyer and can challenge the decision in court, although by that point they may be in jail and fighting their case in front of a hostile judge.

The bill’s defenders also point to the amendment protecting those with expunged records—yet only 15 states automatically seal juvenile offenses. In the rest of the country, Dreamers may have to find their own lawyer, go to court, pay fees and petition for expungement if they don’t want a childhood mistake to count against them on the path to citizenship.

“Children are fundamentally different than adults; a child’s brain does not fully develop until 25 years of age,” said Rep. Tony Cárdenas, a California Democrat who also opposed barring Dreamers with past juvenile offenses from earning legal status. “We have recognized this in the courts and as policymakers. We recognize this as community members and as caregivers.”

“American people,” he said, “benefit from the juvenile-justice system, and Dreamers deserve the same fair process.”