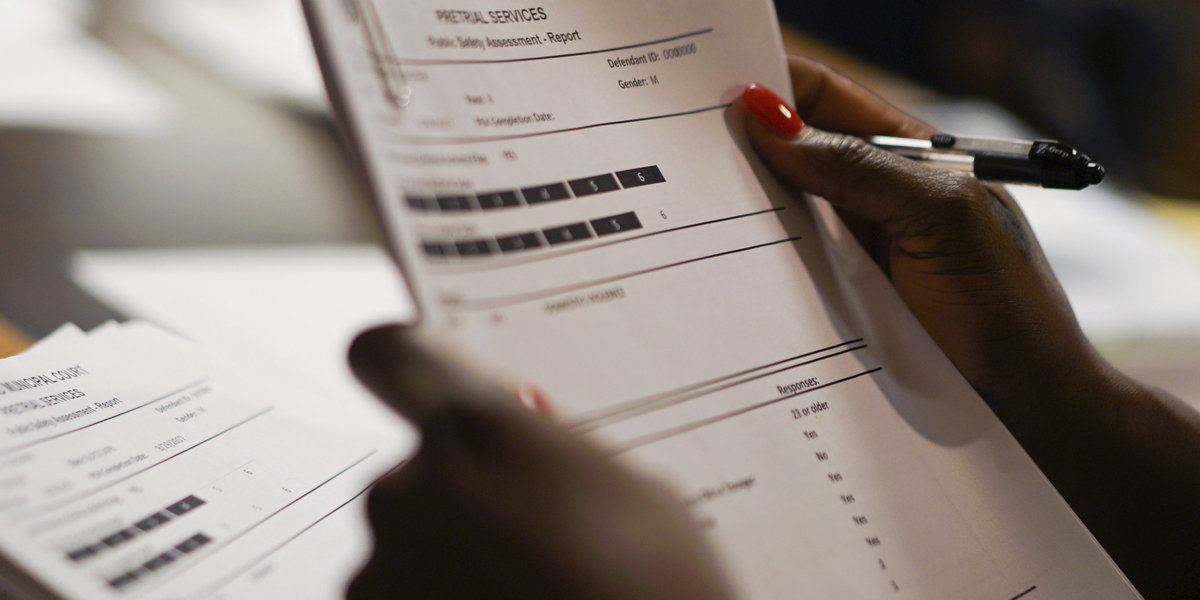 In this data-driven era, if you’ve been arrested it’s increasingly likely the judge deciding whether to send you home or to jail to await trial will consult actuarial math. Specialized algorithms—called risk assessment tools—plumb your history, demographics, and other details to spit out a score quantifying how likely you are to commit another crime or to show up at your next hearing. But these tools have come under fire for treating people of color more harshly.

According to a new study out Monday from the Center for Court Innovation, a justice reform agency based in New York City, those criticisms may be well-founded. “There’s no way to square the circle there, taking the bias out of the system by using data generated by a system shot through with racial bias,” said Matt Watkins, senior writer at the Center and one of the authors of the paper.

Risk assessments are pitched as “race-neutral,” replacing human judgment—subjective, fraught with implicit bias—with objective, scientific criteria. Trouble is, the most accurate tools draw from existing criminal justice data: what happened to large numbers of actual people who were arrested in any particular location. And the experience of actual people in the criminal justice is fraught with racial disparities and implicit bias.

More than 745,000 people are in the nation’s jails on any given day, almost two-thirds of them awaiting trial, according to the Bureau of Justice Statistics. Critics of mass incarceration point to risk assessment tools as one way to chip away at that number. The more people judges feel comfortable releasing to await trial at home, they argue, the fewer people languish in jail unnecessarily. More than a quarter of Americans live in a jurisdiction that uses a risk assessment pre-trial, up from just 10 percent less than a decade ago, according to the Pretrial Justice Institute, which encourages use of the measures.

But concerns about racial bias have dogged risk assessments almost since their inception. In 2014 then–Attorney General Eric Holder warned that the tools “may exacerbate unwarranted and unjust disparities that are already far too common in our criminal justice system and in our society.”

At the time, research on pretrial risk assessments was in its infancy, and research into their racial impact even more so. Then, in 2016, ProPublica published a blockbuster article looking at risk assessments in one Florida county. In pretrial hearings, Broward County used the COMPAS tool, a proprietary algorithm from the for-profit company Northpointe. The reporters found that black defendants were almost twice as likely as white defendants to be “false positives,” labeled high risk when they did not go on to commit another crime. White defendants who went on to commit another crime, by contrast, were more likely than blacks to be labeled low risk.

With the new study, the Center for Court Innovation wanted to determine if they would reach the same conclusions using a different tool in a different place.

To conduct the study, researchers designed their own simple risk assessment tool for defendants in New York City. Researchers used nine questions focused on the current charge and past interactions with the justice system, and applied them to all black, Hispanic, and white people arrested in New York City in 2015—more than 175,000 people. They then followed up two years later to see whether the tool’s predictions were accurate. The study was entirely theoretical; the tool was not used to make any real-world decisions.

Their findings were almost exactly the same as ProPublica’s. Among those who were not re-arrested, almost a quarter of black defendants were classified as high-risk—which would have likely meant awaiting trial in jail—compared with 17 percent of Hispanic defendants, and just 10 percent of white defendants.

Original analysis and perspectives from across the spectrum on criminal justice

Defenders of risk assessment say that the tools are inherently fair because a particular score means what it means—a seven is a seven is a seven—no matter what your race. (In fact,one provocative take is that in order to ensure racially-equal outcomes, a seven must mean something different for black defendants than for white defendants. Julian Adler, the Center for Court Innovation’s director of policy and research, said this idea is unworkable and likely unconstitutional in practice but an interesting thought experiment.) It’s also worth noting that Northpointe and several academic researchers took issue with ProPublica’s analysis, and argued that their findings of racial bias were unfair.

But a legacy of aggressive law enforcement tactics in black neighborhoods means that real-world policing leads to “false positives” in real life—arrests of people who turn out to be innocent of any crime—as well as convictions that wouldn’t have occurred in white neighborhoods. And because risk assessments rely so heavily on prior arrests and convictions, they will inevitably flag black people as risky who are not. As far as the data is concerned, critics of these tools argue, it’s racism in, racism out.

The question the Center for Court Innovation report is left to grapple with is: now what?

It’s a particularly salient question, given the funders of the study: Arnold Ventures (also a funder of The Marshall Project). The Houston-based think tank and philanthropy developed its own risk assessment tool, thePublic Safety Assessment, or PSA, now used in over 200 jurisdictions. It was intended to provide an objective, data-driven alternative to “deeply flawed” human decision-making “reflecting ingrained biases that are virtually impossible to correct,” according to the organization’s statement of principles on pre-trial risk assessment.

Neither the Center for Court Innovation researchers nor the Arnold Foundation are ready to throw out risk assessment—not in a country where “business as usual, without the use of risk assessment, results in over-incarceration and racial bias in incarceration,” according to Adler.

Rather, they encourage using the algorithm in context—as part of a larger decision-making framework that’s sensitive to issues of racial justice. In their study, the Center for Court Innovation researchers applied their risk assessment to various scenarios to see whether they could mitigate its racial bias and still cut back on rates of people sent to jail pre-trial. They found that if judges made decisions based primarily on the seriousness of the charges, then layered risk assessment on top of that, dramatically fewer people would go to jail, and the rate of racially-disparate false positives would almost disappear.

In this scenario, judges would only consider jail for those charged with a violent offense or domestic violence. Anyone charged with a misdemeanor or non-violent felony would automatically go home. Judges would then use risk assessment for the more serious cases, only jailing those deemed moderate- or high-risk. Researchers found this would cut pre-trial detention by more than a half and eliminate the racial bias in false-positives.

That’s why the study is called “Beyond the Algorithm,” Adler said. It’s about “how can we use other tools at our disposal to create a suite of strategies to accomplish what we’re aiming at.”