One day last month, Patrick Edge tried a thought experiment with a roomful of New York City law enforcement authorities. He asked them to close their eyes.

“What do you see? Nothing, right?” he said, as his audience nodded.

So did the lesson he asked them to draw from the experiment.

“Youth need to see that we support them,” said Edge, who offered an alternative idea to the assembled officials: a program at the city’s recreational centers which could serve as an alternative to youth incarceration.

Edge, an engaging 20-year-old who has spent two years in state prison, a few months on Rikers Island—and his entire life distrusting the police—had a captive audience, in a manner of speaking, for his presentation.

He was one of eleven 15-22 year olds who graduated last month from the Justice Ambassadors Youth Council (JAYC), a program that puts formerly incarcerated youth together with senior representatives from courts, police, corrections and the Manhattan District Attorney’s office to brainstorm innovative justice reforms.

What makes JAYC special is that the project was driven and led by the formerly incarcerated youth themselves.

The co-founder, Jarrell Daniels, 24, modeled the program after the Inside Criminal Justice program – a partnership between the Manhattan DA’s Office, the New York State Department of Corrections and Community Supervision, and Columbia University, in which he took part toward the end of a six-year prison sentence he began at age 18.

Daniels observed that he had never had an interaction with law enforcement officials ujntil after he went to prison.“ “I started JAYC so that these interactions could happen before that, especially for black and brown youth in New York City,” he told the group. 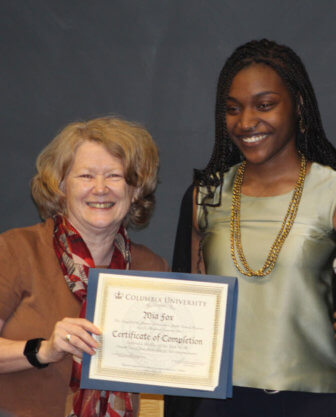 As part of the first graduation ceremony, hosted by Columbia University’s Center for Justice, the JAYC ambassadors presented their own ideas for innovative reforms that they had worked out in discussions with their assigned partners representing official agencies.

While their collaborators could not officially commit to turning the ideas into actual programs, they made clear that they planned to advocate on behalf of these policies, with the hope that some, or at least versions of some, will be implemented.

“I was blown away by the quality of the youth ambassadors’ proposals,” Manhattan District Attorney Cy Vance, who spoke at the ceremony, said later. “I hope that they consider careers in criminal justice, because their perspectives are underrepresented in our system, and their talents are truly immense.

“Youth-driven collaboration is an essential component of increasing trust in law enforcement and confidence in the fairness of our system.”

Edge, who was released from prison in July 2018, met Daniels at Friends at the Island Academy, a program that helps formerly incarcerated individuals reintegrate into society through job preparation programs.

“When Jarrell came and asked me if I wanted to sit in a room with cops, I said ‘hell no,’” Edge told The Crime Report. “But then I when thought about it more, I thought it was important for law enforcement to hear the idea I had about creating an opportunity for youth.”

“I stand here today not letting my past define who I am,” said Edge, as he concluded his presentation. “I (can) rewrite my future.”

The policy proposals presented by the “justice ambassadors” at the ceremony were powerful not only in substance, but also because they carried the authority of personal experience.

Each of the proposals in one form or another addressed racism, trauma, inequality, or economic stagnation—all issues which each of the young people said they had experienced at the hands of officialdom.

For example, Mia Fox, 18, raised by a single mother who has struggled to meet rent and faced several evictions, presented a proposal to restructure the income limits governing what low-income residents of public housing can designate for rent.

“We were trapped in the category of too much for public assistance and not enough to survive,” she said. “We had to choose between bare necessities and rent.”

Lovestar Rogers, 21, worked with the Manhattan DA’s Assistant District Attorney Chauncey Parker to develop a policy that incorporates social workers into the court process so that defendants are emotionally supported.

“The importance and, in my view, the ’magic’ — of the Justice Ambassadors program is that it brings together in one room for six weeks people from very different perspectives,” Chauncey Parker, executive assistant district attorney and special policy advisor to the Manhattan DA’s office, told The Crime Report. 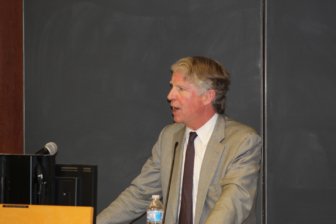 “Through direct and honest, sometimes difficult but always respectful, conversations, we learned to see each other and our perspectives in a new light. And what we learned most importantly is that while we may passionately disagree at times we all truly share the same goal—the same North Star—to make a better world, and in particular, a more fair and just criminal justice system.”

Daniels put it in a different way.

“As children at some point we all had a bright idea,” he said. “All I ask is that we no longer wait on making those ideas into lived realities.”