Is the justice system oppressive or lax when it comes to holding offenders responsible for their actions?

Data from the US Department of Justice and the United Kingdom states that offenders have endless contact with the justice system with minimum consequences.

The average number of previous convictions was 6.1 among offenders with a criminal history.

There is endless debate as to how many contacts with the justice system justifies a formal response or sanction.

There are those who see the system as historically or currently repressive as to who comes into contact with law enforcement, the reasons for that contact, and what we do with those detained. Cops and the justice system are literally blamed for crime and related social problems through alleged harsh and unnecessary actions.

Recent articles by the Philadelphia Inquirer ask about the supposed severity of parole and probation supervision suggesting that it’s an oppressive trap. Even the use of fines is hotly contested as fundamentally unfair or repressive.

There are those stating that offenders have endless contact with the criminal justice system thus having endless bites at the apple, mostly without major consequences. All this was happening before a new breed of prosecutors in select cities made promises not to enforce arrests for a wide range of property and some violent crimes.

Those advocating for the rights of women regarding harassment and violence consistently ask why society is so unwilling to hold offenders accountable for their actions? The same can be asked of victims of child sexual violence.

Is there any difference between victims of these crimes and the immense psychological or physical damage of a robbery or homicide or assault? Per my experience with victims, (I was the senior specialist for victim issues for the Department of Justice’s clearinghouse), these crimes and others can have devastating consequences for individuals and urban areas.

As a senior spokesperson for state and federal law enforcement and correctional agencies, I had the opportunity to look at the arrests and prosecutions of hundreds of offenders charged with serious crimes. I also reviewed their time on parole or probation.

What I found were long rap sheets filled with arrests and prosecutions without any serious periods of incarceration. What I found was endless violations of the rules and laws while on community supervision. I discovered that people caught up in the justice system are often provided with endless breaks.

Almost three-quarters (72.8%) of federal offenders sentenced in fiscal year 2016 had been convicted of a prior offense. The average number of previous convictions was 6.1 among offenders with a criminal history. About 3 in 5 state defendants had at least one prior conviction, Convictions.

16 to 50 percent of federal crimes are declined from prosecution, per “Federal Justice Statistics.” 34 percent of state felony cases are not convicted (approximately nine percent involve a deferred adjudication or diversion outcome), per “Felony Defendants in Large Urban Counties,” Prosecutions.

I’ve seen those on parole murder a police officer who had over seventy violations without a serious response or consequences from agents.

The Daily Mail is a UK publication. Spellings were changed to American English. Edited for brevity.

Thieves, fraudsters, robbers and violent criminals are being spared prison sentences despite committing up to 60 previous offenses, new data has revealed.

Figures from the Ministry of Justice showed that offenders were receiving dozens of convictions and cautions before being handed a custodial sentence.

The research, which spanned the years 2016 to 2018, found the highest number of prior offenses before a prison sentence was 60 for theft, with a peak of 53 noted at the start of the period and 38 at the end.

In the case of fraud, one offender had gathered some 53 previous convictions or cautions before they were eventually jailed in 2017, the Telegraph reported.

One offender, for example, had been convicted or cautioned 12 times for assaulting a police officer before being jailed in 2018.

Others gathered up to 10 previous convictions for sexual assault before receiving a custodial sentence.

In total, Onward found the number of criminals with more than 50 previous convictions who avoided jail sentences rose to 3,916 in 2018.

This was more than triple the 1,299 total recorded 11 years earlier.

Does Similar Research Exist For The American Justice System? From The US Department of Justice:

Seventy-four percent of all defendants had at least one prior felony or misdemeanor arrest.  Among defendants charged with a violent offense, robbery (73%) and assault (72%) defendants were more likely to have an arrest record than those charged with murder (67%) or rape (58%).

Nearly half of all defendants had multiple prior felony arrest charges, including 25% with five or more. More than half of the defendants facing a current charge for a violent felony had been previously arrested for a felony, including 64% of robbery defendants and 60% of murder defendants.

Chart of Prior Arrests 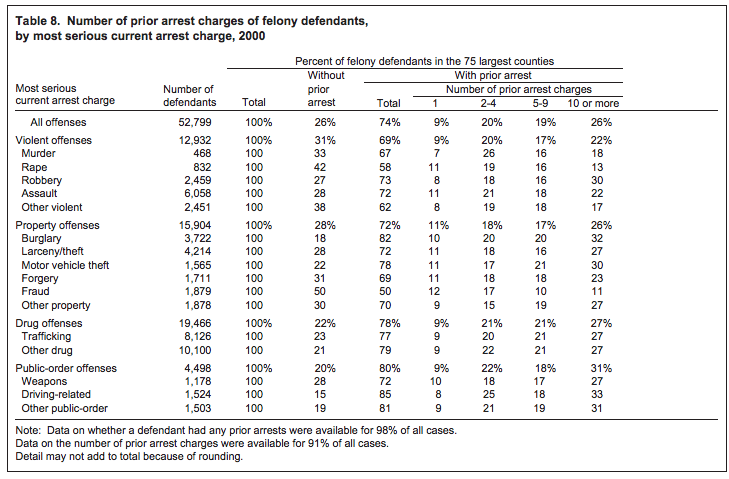 Fifty-eight percent of felony defendants in the 75 largest counties had at least one prior conviction for a misdemeanor or a felony.

More than three-fourths of those with a conviction record, accounting for 45% of defendants overall, had more than one prior conviction.

Twenty-two percent of all defendants had five or more prior convictions.

Thirty-nine percent of property defendants had a felony conviction record, including nearly half of those charged with motor vehicle theft (48%) or burglary (47%).

Chart of Prior Convictions 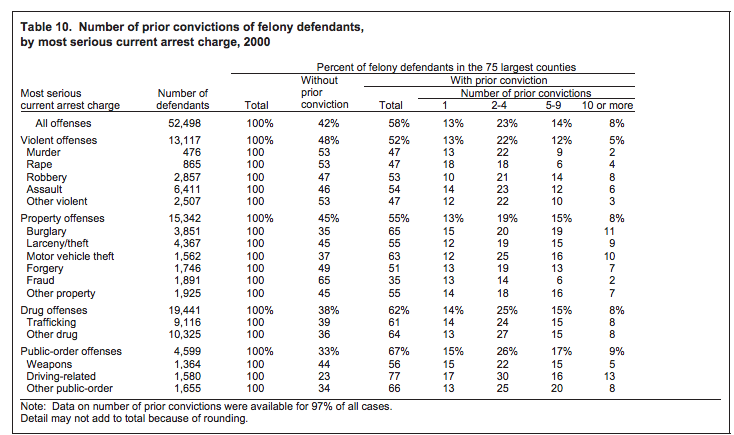 The most common understanding of recidivism is based state data from the US Department of Justice, Bureau of Justice Statistics, stating that two-thirds (68 percent) of prisoners released were arrested for a new crime within three years of release from prison, and three-quarters (77 percent) were arrested within five years, Recidivism. Most go back to prison.

It’s not my purpose to discourage sentencing reform and rehabilitation efforts; I support both. It’s in our best interest to assist people coming out of prison. Not everyone needs to be incarcerated and not all sentences have to be long. There are a ton of lower-level offenders who desist after a first or second arrest.

But the American public understands that offenders get prison because they have done something terribly wrong (54 percent are currently in for violent crimes per the Bureau of Justice Statistics) or have a long history of previous arrests and convictions. Note that only 42 percent of convicted felons get prison terms.

But if you start a discussion of criminal justice reform via a disingenuous statement as to the alleged oppressiveness of the justice system, most people will either be confused or put off or angry. They understand that you’re not being honest. The facts prove it.

There is nothing wrong with transparency. The American public can handle it. Offenders routinely come into contact with the justice system based solely on what they did. We should be willing to admit that offenders get numerous bites at the apple before and after incarceration, if they get prison at all.

The system is not nearly as oppressive or unfair as advocates make it out to be. If you doubt that, speak to female victims of sex crimes and harassment as to why no one would take their cases seriously after their assaulters were found to have long histories of similar offenses.

The #MeToo movement insists that lawbreakers need to be held accountable and pay a price for their actions. We universally agree that should be the case. Then why isn’t the same philosophy in place for other forms of violent crime?