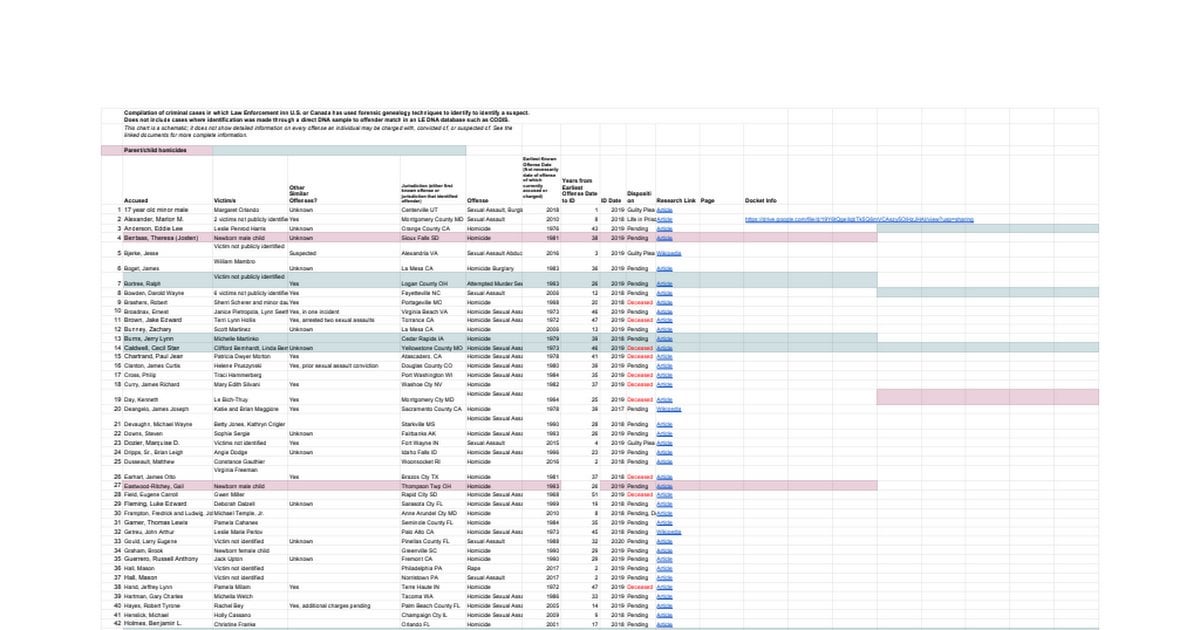 I’ve created a spreadsheet available for viewing on Google that lists cases in the US and Canada in which a suspect has been ID’d through forensic genealogy testing. Here’s a link: List of cases utilizing forensic genealogy I will update the list as time allows. Note that there is also a Wikipedia entry covering this topic; it contains a significant amount of narrative, including discussion of the different labs that were used by LE for testing and matching. I haven’t tried to match my list with the cases shown in the Wikipedia entry, although I plan to do so. For the moment, I’m ahead of Wikipedia by having two 2020 entries not yet reflected there. 🙂

Unlike the fuller discussion in the Wikipedia entry, my list is a schematic; it is not intended to be a comprehensive source of information on these cases, but a starting point for further research, and a simple way to get an idea of the kinds of cases and the jurisdictions that are using these techniques. Each entry contains a link to at least one news article or other source as a starting point. I attempted to use only non-paywall sources. In addition to the link, the spreadsheet contains basic information such as the name of the suspect; the name of the earliest known victim, if known (names of sexual assault victims are often withheld by LE); jurisdiction of earliest known offense or where LE ID’d the suspect; date of first known offense; date of identification; status of the case. Not perfect or completely consistent, as I said, it’s a starting point.

As of this post, there are 81 entries, although police in Chicago are about to announce another solved cold case this afternoon, perhaps one involving forensic genealogy. Two of the entries are for suspects in the same offense. Not all of the cases are sexually motivated homicides. Some are “simple” homicides, and some are “simple” sexual assaults, i.e., not homicides. A handful of entries involve children abandoned as newborns. One involves a parent accused of murdering his minor son and wife. In 19 of the cases, the suspect is deceased.

Please let me know if you come across any errors.