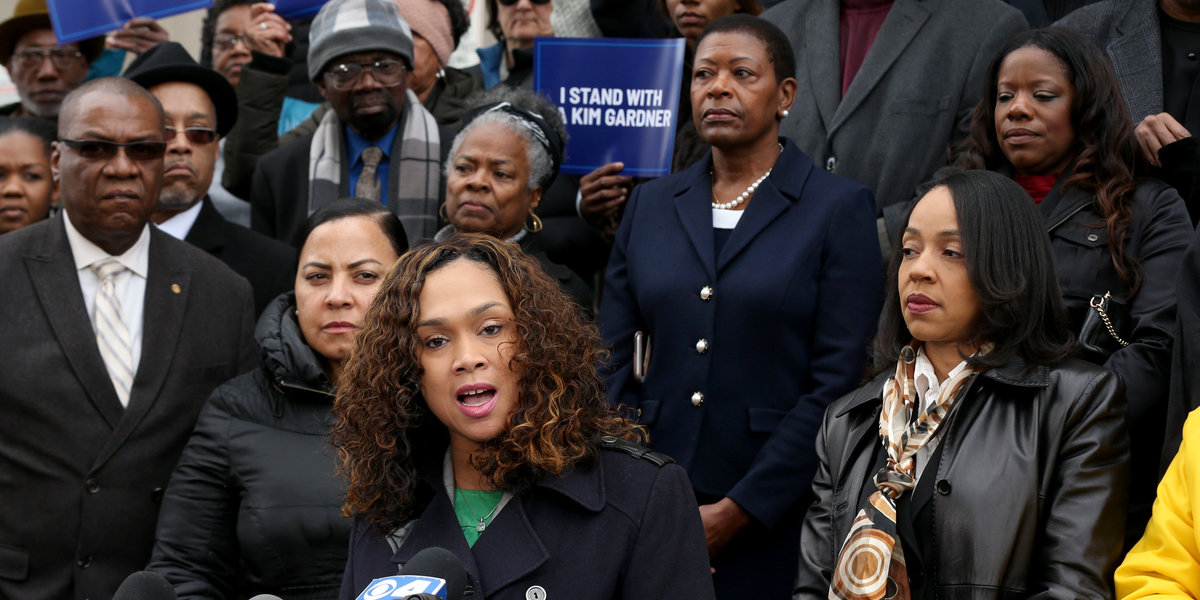 St. Louis’s first black prosecutor is fighting back. This week, Circuit Attorney Kimberly M. Gardner filed a federal lawsuit against her entire city leadership, accusing its mostly white police force and political establishment of engaging in a racially motivated conspiracy to drive her out of office and block her efforts to make the city’s justice system less punitive toward people of color.

Gardner, who took office in 2017, is hardly alone in facing opposition. Many other recently elected, increasingly progressive district attorneys around the country have run into entrenched resistance from conservative, often white police officers and their unions, judges, governors and even the attorney general of the United States. And black women prosecutors in particular have experienced a targeted, vehement form of defiance and intimidation.

“It’s already tough enough to drive change in criminal justice, but then to be black women, who make up just 1 percent of elected prosecutors?” Baltimore State’s Attorney Marilyn Mosby, who in 2014 became one of the first to break this particular glass ceiling, said in an interview. “The disrespect would look different if I looked different. It’s extremely personal. The first thing they come at when you’re a black woman is your competency.”

“That’s why this lawsuit is symbolic for all of us,” Mosby said.

Gardner’s suit cites a rarely used federal law from just after the Civil War that allowed the U.S. government to crack down on the Ku Klux Klan and other racist groups, and argues that St. Louis has been acting like just such an organization. St. Louis Police Officers’ Association officials and the city have denied the allegations.

The blowback to Gardner came as she tried to rein in police misconduct in part by refusing to prosecute cases brought to her by cops with a documented history of lying, abuse or corruption. A police union spokesman called her a “menace to society” who must be removed “by force or by choice.” Then she received stacks of letters calling her a “dumb nigger bitch” and a “NIGGER Cunt” and saying “you’re not going to beat these white boys,” according to her lawsuit.

In Orlando, Aramis Ayala, the first black elected prosecutor in Florida’s history, decided in 2017 that she would no longer seek the death penalty. Later that same day, the state’s then-governor, Republican Rick Scott, took the highly unusual step of reassigning a high-profile death penalty case from Ayala to a prosecutor from another county, so that she would no longer have a say in it.

A month later, she received a noose in the mail.

In Chicago, white nationalists have targeted the prosecutor Kim Foxx, the first black woman to become state’s attorney there.

In Boston, the National Police Association filed a formal ethics complaint against newly elected prosecutor Rachael Rollins, also the first black woman district attorney in her city. They did so before she even took office, saying that her proposals would incite law-breaking and put cops at risk.

And in Baltimore, Mosby famously attempted to prosecute the police officers involved in the death of Freddie Gray, whose broken body was found in a police van in 2015. Their response was to sue her for malicious prosecution—and a judge allowed the suit to go forward.

Suing prosecutors successfully is essentially unheard of in the U.S. justice system, because they are supposed to have “absolute immunity” from legal threats made against them for just doing their job.

Mosby, Rollins, Ayala and several other black women prosecutors related so much to the frustration voiced in Gardner’s lawsuit that they flew out to St. Louis this week to stand by her at a rally. The crowd shouted, “Hands off Kim! Hands off my prosecutor!”

Rollins, the Boston prosecutor, says this solidarity renewed her commitment to do what she says the voters put her in office to do. “Me and my sisters who are now in this role, we’re not going to tolerate it anymore, and we’re not going to ask nicely,” she said in an interview.

Police departments and unions are overwhelmingly male and entirely unelected, Rollins points out, so she and her fellow prosecutors have to remember they’re just not accountable to the same communities.

Mosby agrees. “Now I have a network of individuals who have experienced what I have,” she said. “We have a text thread where we encourage each other not to internalize things.”

Yet just after the Gardner rally, Mosby received a voicemail from someone who said she was from Illinois near St. Louis, berating her for traveling to support Gardner. In the recording, the caller said of Gardner and Mosby, “You hate cops, you hate white people, you do everything you can to give all the blacks who are criminals the benefit of the doubt… There’s only one thing worse than a badass, empowered black woman—that’s a badass, empowered black woman who’s got [the] public’s reins in her hands. If we’d known you all were gonna be this much fucking trouble we would’ve picked our own fucking cotton.”

Gardner’s dominant victory in the 2016 election gave her a mandate from St. Louis’s voters to pursue the kinds of criminal justice reforms that so many had taken to the streets to demand two years earlier in nearby Ferguson. She has refused to prosecute certain low-level, nonviolent drug crimes; proposed setting up independent investigations of police shootings; and continued to evaluate the credibility of officers who testify in court.

Whether a federal judge will agree with her lawsuit, though, remains to be seen. The 1871 law it cites has only been used a handful of times, including against white nationalists behind the deadly 2017 rally in Charlottesville, Virginia, and also decades ago to stop police in the South from denying black people their voting rights.

Jeff Roorda, a spokesman for the St. Louis Police Officers’ Association and one of the many named defendants in Gardner’s suit, said in a statement, “Instead of standing with the police officers who disrupt the violent crimes that disproportionately target African-American victims here, Kim Gardner has chosen to invoke the specter of the Ku Klux Klan by comparing the police officers who defend the very citizens who elected [her] to this notorious hate group. How pathetic. How desperate.”

Changing the culture of an office that has traditionally favored tough-on-crime approaches is no easy task for anyone. In Philadelphia, Larry Krasner, who is white, has instituted some of the same reforms taking root in St. Louis, Baltimore and Boston, and has been maligned for it by the media and top law-enforcement officials. But the derision has largely focused on how to run the office, not attacks on his identity.

Not every black woman prosecutor has faced intimidation. In Durham, North Carolina, Satana Deberry’s tenure offers a revealing contrast to that of Gardner’s.

Deberry, like Gardner and her peers, ran for prosecutor on a platform highlighting the justice system’s outsized impact on the black community. It’s a perspective, she says, informed by her experiences as a black woman, a demographic she views as the “system’s biggest customers.”

“We are the ones who make bond for people. We are the ones who, when folks are arrested, stay home and take care of the community. We are increasingly being incarcerated ourselves. We are more likely to be victims of crimes,” Deberry said.

Yet Durham’s political landscape has served as a buffer against the most virulent kind of backlash.

The left-leaning city has a long history of black political power, so voters are more accustomed to seeing black people in positions of authority, Deberry points out. Currently, they hold many of the city’s top law-enforcement positions, including police chief and sheriff.

But in St. Louis, the powers-that-be have tried to paint Gardner as an outsider, despite her many years of service to her community.

“Criminal justice is kind of like art: People think they know it when they see it,” Deberry said. “What you can’t say is that [Gardner] is not competent and not working hard for the people who elected her. And that she is not doing what they’ve elected her to do.”