John R. Lott Jr., an economist and author of the book “More Guns, Less Crime,” said in an interview that Northwell’s lineup “is pretty one-sided.”

Lott pointed to a just-published article he co-authored in the libertarian Cato Institute’s Regulation magazine, arguing that “public health researchers are much more supportive of gun control” — red-flag laws, bans on certain weapons or magazines, universal background checks, licensing and registration — “than are either criminologists or economists.”

In another book, “The War on Guns: Arming Yourself Against Gun Control Lies, he wrote of the public-health approach: “There is no mention that widespread gun ownership deters criminals from breaking into homes. There is no mention that gun ownership helps protect residents from harm in the event of a break-in, or that mass public shooters consistently attack gun-free zones where they don’t have to worry about victims being able to defend themselves.”

A 1996 federal law known as the Dickey Amendment bars certain federal research funds from being “used to advocate or promote gun control.” Several attendees Thursday lamented that the law discourages funding for gun-related research. Lynam told Newsday earlier this week that Northwell hopes the event will encourage health care organizations to join to pursue research without the government funding. . . .

Ms. Goeser has become a vocal Second Amendment advocate, working with John Lott Jr. at the Crime Prevention Research Center and writing two books. Her latest, “Stalked and Defenseless: How Gun Control Helped My Stalker Murder My Husband in Front of Me,” was released in November. . . . 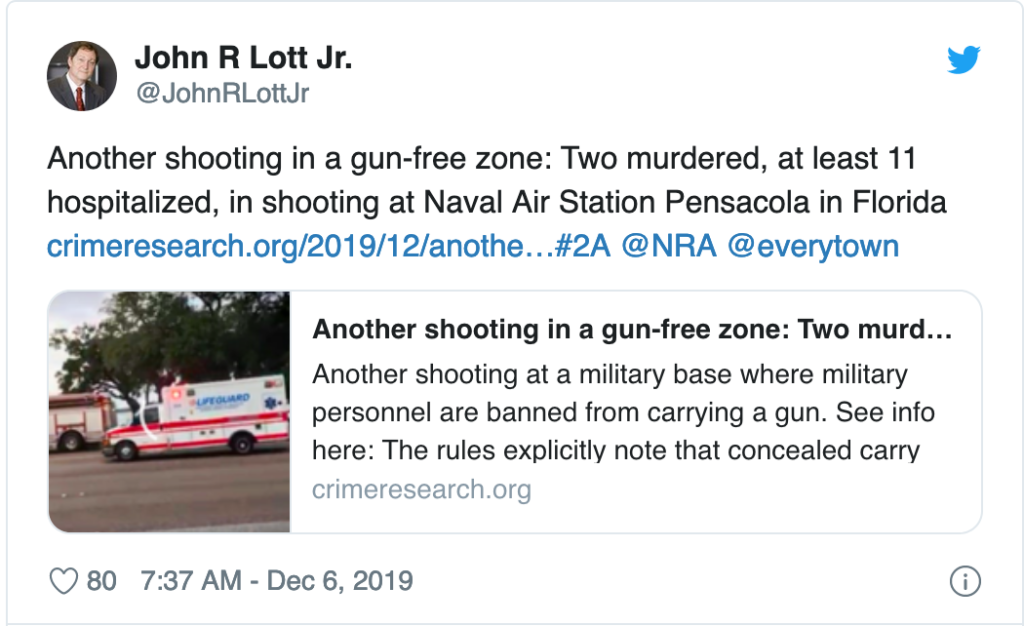 It bolstered the CEOs’ arguments by repeating the common argument that “A number of polls have put backing for such policies above 90 percent.” But the Times failed to admit that in the past, support has plummeted once there was specific gun control legislation in Congress. They also ignored the potential unconstitutionality of red flag laws, the poor enforcement of existing gun laws, or criticism of background check expansions. Economist John R. Lott wrote in February, that “there isn’t one such attack this century” that would have been stopped by Rep. Mike Thompson’s (D-CA) current legislation to expand background checks.. . .

A new paper by three top researchers has revealed public health researchers are “are much more supportive of gun control than are either criminologists or economists.”

The report, authored by John R. Lott, Arther Z. Berg. MD, and Gary A. Mauser, is headlined “Expert Views on Gun Laws.” Lott is founder and president of the Crime Prevention Research Center, Berg is at the Harvard University Department of Psychiatry and Mauser is with the Simon Fraser University Beedie School of Business.

The eight-page report appears in the Winter edition of Regulation, the Cato Institute’s review of Business and Government. The trio obtained responses from 120 experts and compared “the views of public health researchers with those of criminologists and economists on a wide range of gun control policies.”

That’s nearly four times the number of experts assembled by the New York Times back in 2017 for a pair of articles on “how well public opinion on gun control corresponded with the opinions of a panel of experts.” The Times panel included 32 people, according to the new report. . . .

In the fantasy world inhabited by progressives, passing laws to restrict gun ownership and the carrying of firearms prevents violence. The precise opposite is the truth, as demonstrated convincingly by John Lott, whose research led him to change his position on gun control once he discovered the facts.  His book More Guns Less Crimeis required reading for anyone who wants to be honest about preventing the death of innocent Americans. . . .

According to the Crime Prevention Research Center, 94 percent of post-1950 mass shootings have occurred in “gun free” zones, which, of course, are only good-guy gun-free. (Note: The left-wing Washington Postquestions this, taking issue with the definition of “mass shootings.”) . . .

Another study revealed that armed citizens successfully fend off such attacks between two and 2.5 million times a year. As John Lott, founder of the Crime Prevention Research Center and author of More Guns, Less Crimeand The Bias Against Guns, explained, the perception of the presence of a firearm in the hands of a law-abiding citizen provides a persuasive deterrent to a criminal seeking a target. Hence, not surprisingly, Lott continues to track the decline in gun violence as private ownership of firearms increases. . . .

Perhaps you missed this new study from the Crime Prevention Research Center. That wouldn’t be surprising, as it’s not the kind of topic that stirs the mainstream media—or even the alternative media for that matter.

Still, it offers a big reveal.

It found that criminologists and economists are much less supportive of gun control than public-health researchers.

This explains why so many on the anti-Second Amendment front want to steer lots more of our money to the Centers for Disease Control and Prevention (CDC) for research on violence related to guns instead of to agencies within the criminal justice system.

The paper was done by three researchers, John R. Lott, the founder and president of the Crime Prevention Research Center and Prevention; Arther Z. Berg, M.D., who is with the Harvard University Department of Psychiatry; and Gary A. Mauser, who is with the Simon Fraser University Beedie School of Business.

These three researchers compared “the views of public health researchers with those of criminologists and economists on a wide range of gun control policies.”

They found that when asked about the best ways to stop mass-murderers, criminologists and economists preferred: . . .

The rest of the piece is available here.

…not one of the mass shootings since at least 2000…would’ve been stopped by these laws. Nor would renewing the federal “assault weapons” ban solve the problem; even research paid for by Bill Clinton’s administration found no evidence the ban reduced any type of crime. …a young ISIS sympathizer planned a shooting at one of the largest churches in Detroit. An FBI wire recorded him explaining why he had picked the church as a target: “It’s easy, and a lot of people go there. Plus people are not allowed to carry guns in church.” …PoliceOne, a private organization with 450,000 members (380,000 full-time active law enforcement and 70,000 retired), polled its members in 2013 shortly after the Newtown, Conn., massacre. Eighty percent of respondents said allowing legally armed citizens to carry guns in places such as Newtown and Aurora would have reduced the number of casualties. …According to police and prosecutors, there have been dozens of cases of permit holders clearly stopping what would have been mass public shootings. It’s understandable these killers avoid places where they can’t kill a large number of people. Research I have conducted with economist Bill Landes looked at 13 different types of gun-control laws. Right-to-carry laws were the only type that made a difference in the rate and severity of these mass public shootings. …even the most ardent gun-control advocate would never put “Gun-Free Zone” signs on their homes. Let’s finally stop putting them elsewhere.

John Lott is an invaluable resource on these issues

A study on the number of concealed-carry permit holders released by gun expert John Lott indicated that “In 2019, the number of concealed handgun permits soared to now over 18.66 million—a 304 percent increase since 2007. About an 8 percent growth over the number of permits since 2018.” Additionally, per capita, gun ownership increased by 56 percentfrom 1993 to 2013. If we had taken the media at their word, we would have expected gun crime to skyrocket. Nevertheless, gun crime continued to plummet according to the FBI, which highlighted a 49 percent decrease. . . .