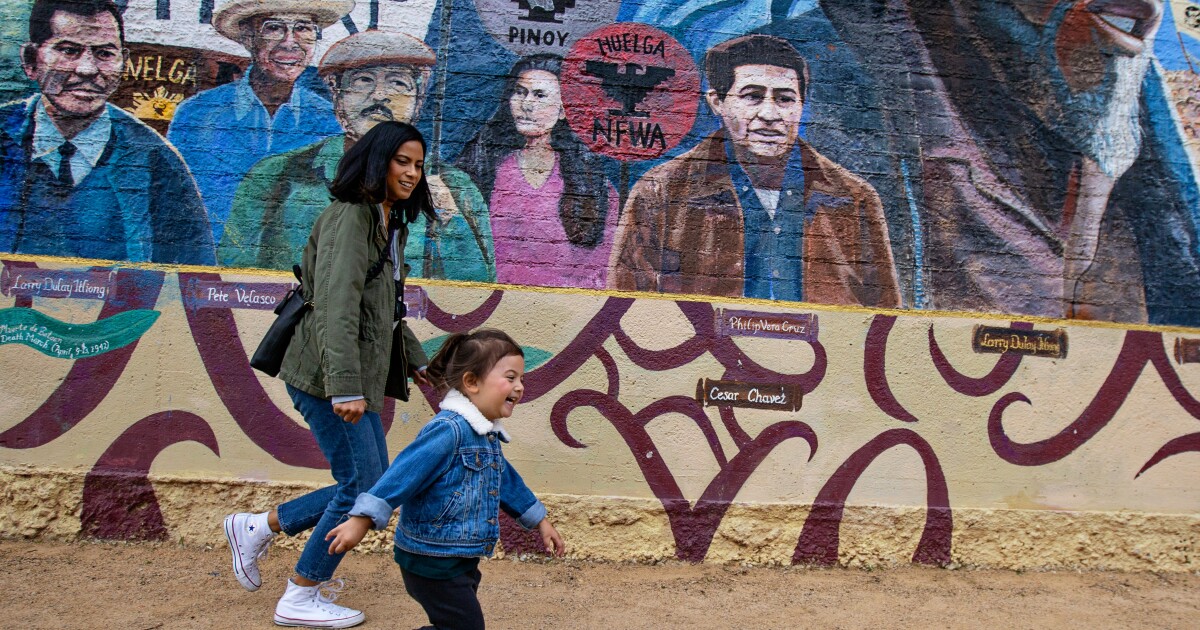 For the last few months, Noel Alumit, a writer in Historic Filipinotown, has been adopting plants from Craigslist users, moved by the plaintive note in their appeals.

I’ve been evicted, their posts begin. I’ve lived here for 2 decades and my landlord is selling my building. Please give my plants a good home.

“I guess I feel like I’m being helpful by taking their trees,” Alumit said.

He would prefer it if his neighbors could stay. But if they can’t, at least he can give their plants a home.

Surrounded by more expensive housing markets, Historic Filipinotown is one of the last places in central Los Angeles where cooks, housekeepers, Uber drivers and new immigrants can afford to live. Alumit’s mother, a nurse, and his father, a security guard, saved everything they had to buy a home here in 1978. The neighborhood’s median income of about $26,700 is about 40% of the county’s median, and about 95% of residents are renters.

But Historic Filipinotown’s affordability is also the source of its vulnerability. According to an analysis by the UCLA Law Review, about 620 buildings in the area are subject to rent control laws, which makes the properties more tempting to buyers because the potential profits from raising rent would be much higher.

And last year, Historic Filipinotown, known these days as HiFi, was named the fifth coolest neighborhood in the world by Time Out magazine.

Long story short: Gentrification is happening. The garden of orphaned plants in the backyard of Alumit’s family home is thriving. And I’m hearing the same frustrating, circular debate I’ve heard in so many neighborhoods across the city.

Those who can afford to benefit from the changes point to rising property values, cleaner streets and falling crime, and argue that a rising tide lifts all boats. Anyone questioning the changes is labeled a naive idealist fighting the inevitable.

Those who can’t afford to benefit are left to wonder, who can afford a boat? And all newcomers to the neighborhood, no matter how well-meaning, are viewed with knee-jerk suspicion.

I’m really hoping that Historic Filipinotown will be different. And these last few weeks, I’ve met a lot of people who are trying to imagine a different future.

What if the new neighborhood could share space with the old one, instead of boxing it out? What if newcomers cared to form meaningful connections with longtime residents? What if we measured neighborhood progress not in property value but in people and the opportunities available to them?

Dan Lin, creator of the “Lego” movies and newcomer to the neighborhood, is one of those hopefuls.

He aspires to create a business model with three main bottom lines: generating profits for shareholders, improving society at large and having a positive effect in the neighborhood.

It’s natural to be skeptical of such lofty goals, and I was, too. But I just can’t think of another developer who has taken as many steps as Lin has to make those goals a reality.

When Lin moved in, he outbid a developer who planned to demolish the property and replace it with a multistory, mixed-use residential complex. He then became the steward of “Gintong Kasaysayan,” considered the largest and most significant Filipino American mural in the United States. He paid to have it restored, and then paid another Filipino American artist to establish a “HiFi” mural on the campus’ east wall.

Lin also joined the board of the women’s shelter across the street, and helped established a youth mentoring program at Union Elementary School staffed by his employees — screenwriters, illustrators and filmmakers. During the course of a school year, they work with students to create original screenplays that will eventually be performed at the school by professional actors and actresses.

And when the property across the street from Rideback became available, Lin contacted the landlord and connected him with a promising young Filipino American restaurateur named Justin Foronda. Lin had attended Foronda’s pop-up backyard brunches in the neighborhood and was a fan of his food.

Foronda, 34, was born and raised in Historic Filipinotown. He worked as a nurse but had always dreamed of opening a restaurant in the neighborhood he grew up in. He often drove around looking for an affordable space. Lin’s offer was an opportunity he never thought he’d get.

“He could have given it to anybody,” Foronda said. “I really don’t know what he saw in me.”

Foronda named his restaurant after his hometown. Not the old name of Historic Filipinotown, which he never really used anyway, but the new one: HiFi. Foronda wanted people to use it.

“We can’t tell people where to live,” Foronda said. “They’re going to move in no matter what. But we can tell them about where they live. And that’s all we can do.”

At least a handful of the new businesses attracting people to Historic Filipinotown are run by people with connections to the area. Genever, a gin bar opened by three Filipina American women, was also highlighted in the Time Out article.

Roselma Samala, one of the founders, was introduced to the area when she was volunteering at the Search to Involve Pilipino Americans, a longtime community organization. Their bar occupies SIPA’s former headquarters, and that was a big reason they chose it, Salama said.

“It was very eye-opening, like everything was falling into place. This was where we were supposed to be,” Salama said.

When the Time Out article came out and CNN aggregated it, Johneric Concordia’s first reaction was alarm. His restaurant, the Park’s Finest, a popular Filipino American barbecue restaurant, was highlighted in the article as well. But he knew what “coolest” would mean.

“Everyone just looked at each other and was like, ‘Your rent just went up $800 for no reason,’” Concordia said.

He’s worried that the popularity of the neighborhood will be its downfall, and hoping people will take the time to learn the history.

“People love our culture and our space. But in that process, they lose it. The neighborhood just becomes something they can brag about. We’re the decorative backdrop for your selfie,” Concordia said.

Concordia fights back by trying to plant flags for the community. When a group of investors reached out to him about opening a Southern cocktail bar next door to his restaurant called Thunderbolt, Concordia agreed to partner with them and help craft the menu. The most popular drink on the menu is the P-Town Boxing Club, a coconut-washed rye with pandan and bitters. It’s named for the local boxing club Concordia founded, but he also intends it as a reference to the historic involvement of Filipinos in the L.A. boxing scene.

Community-minded business owners and locals can only do so much to fight displacement. But the connections they form can help keep the identity of the neighborhood alive.

Newcomers might not know that a Filipino American family donated the land for the community garden at Unidad Park, or that the beloved quirky giraffe sign on Beverly once belonged to Big Top Liquor, which birthed a street gang of the same name. But if you run into Concordia and ask, he might tell you.

Low-income residents probably can’t afford a drink at the new bars in the area. But on Wednesdays, the Park’s Finest offers what Concordia calls a worker’s plate — pulled pork, sausage links, chicken, coconut beef, cornbread, vegetables and rice for just $13.

These things matter, because what’s painful about gentrification is not just displacement. It’s also replacement — the concern that the new community wants nothing to do with the old one.

Two years ago, when city officials presented a set of aesthetic requirements for an area encompassing Historic Filipinotown’s main corridors called North Westlake Design District, many residents decried the plan as an attempt to rename the community and accelerate gentrification.

City officials told me that there was no intention of renaming the community. “North Westlake” is simply the name for the neighborhood used on city maps.

The plan, which is on hold indefinitely, was aimed at making the neighborhood more pedestrian-friendly by regulating things like pedestrian bridges, ground-floor parking garages and building setbacks. And the requirements would have given city officials a theoretical bargaining chip with which they could negotiate with developers for things like affordable housing.

But a lot of people just reacted to the name.

“This is always going to be Historic Filipinotown,” Foronda said. “Y’all can call it whatever you want to.”

It’s vitally important to fight displacement and unjust evictions with lawsuits, tenant organizing and legal advocacy, and we need far more affordable housing protections and requirements than we have.

But we can all combat replacement by just paying attention to the neighborhoods we moved to and trying to see them through the eyes of the people who have lived there.

Remy V. Geaga was a community leader who fought for social services, housing and food for needy immigrants. The intersection of Temple Street and Alvarado Boulevard bears a sign with her name.

When I lived in East Hollywood, it was just another piece of forgotten history I drove by on the way to work. Luckily, Joselyn had a pamphlet ready for me.

We met at Doubting Thomas, a sleek new coffee shop in the bottom floor of a new residential complex that some in the neighborhood have cited as a troubling sign of gentrification. But Joselyn said the coffee shop “brightened my whole outlook, my whole life.”

She remembers when the site now occupied by Doubting Thomas was just a dirty trash-strewn eyesore. Nearly every day for eight years, she and three other neighbors used to drag their own trash cans to the property and pick up the litter themselves, frustrated by the slow response from the city.

These days, she can sip a latte and gaze at the stretch of sidewalk she used to clean through the coffee shop’s polished storefront glass.

Joselyn understands that the future of the community is not guaranteed. When I ask her about her hopes for the neighborhood, she quotes the Filipino revolutionary and national hero José Rizal.

He who does not know how to look back at where he came from will never get to his destination.