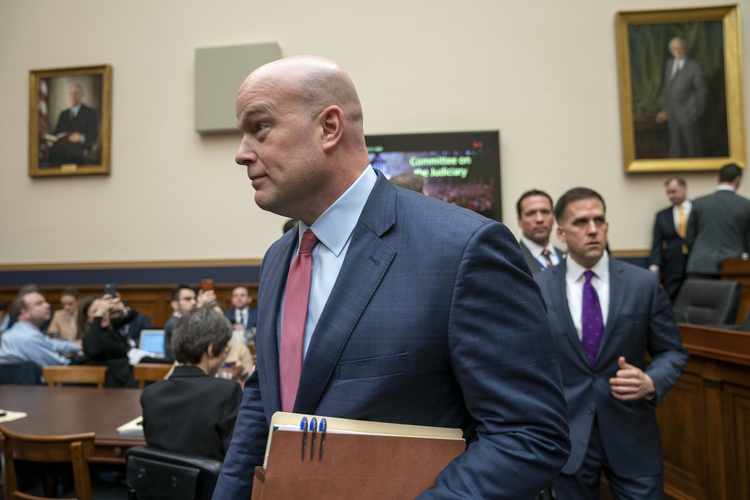 President Trump and his legal team are zeroing in on Democrats’ decision to pursue a broad abuse of power charge against him as the reason for the Senate to “speedily” dismiss the impeachment case getting underway in that chamber Tuesday.

The president’s lawyers on Monday asserted that Trump did “absolutely nothing wrong” regarding military aid for Ukraine, and because he committed no crime, the Democrats’ impeachment articles are both “frivolous” and a “dangerous perversion of the Constitution.”  Convicting President Trump would “permanently weaken the presidency and forever alter the balance among the branches of government in a manner that offends the constitutional design established by the founders,” Trump’s lawyers wrote in a 110-page defense.

Trump and his attorneys and allies, including Rudy Giuliani and former acting Attorney General Matthew Whitaker (pictured), have long said abuse of power — one of two articles of impeachment the House approved on Dec. 18. — isn’t an impeachable offense because it doesn’t fall into the constitutional requirements for removing a president, a point they continued to drive home in their Monday defense.

“House Democrats were determined from the outset to find some way — any way — to corrupt the extraordinary power of impeachment for use as a political tool to overturn the results of the election to interfere in the 2020 election,” the lawyers wrote in the legal brief. “All of that is a dangerous perversion of the Constitution that the Senate should swiftly and roundly condemn.”

The House Democrats’ case against the president is deeply flawed and breaks historical impeachment precedent, Trump’s lawyers argued, because there is no proof that President Trump tied the security aid to an announcement by Ukraine that it would investigate Democratic presidential candidate Joe Biden. In fact, no Ukrainian investigation took place and the aid was ultimately delivered, they point out.

The impeachment case is based on “assumption, presumption and speculation from people who had no first-hand knowledge and were relying on hearsay, or double and triple hearsay, which would never be admitted into evidence in any court in this country,” said a source working with Trump’s legal team.

In fact, President Andrew Johnson was only impeached after he violated the Tenure of Office Act, which prevented the president from removing certain officeholders without the approval of the Senate.

“Earlier attempts to impeach President Johnson in fact failed because the House of Representatives concluded they could not impeach him without of the violation of the specific law,” the source said.

The source also rejected an assertion last week by the Government Accountability Office that the White House broke the law when it froze aid to Ukraine, calling it a “back door” attempt by Democrats to insert new evidence that is not included in the actual charging documents, the formal articles of impeachment.

One day after the House delivered the articles of impeachment to the Senate, the GAO, the watchdog agency that reports to Congress, argued that the Office of Management and Budget withheld funds over a policy disagreement, which amounted to a violation of the Impoundment Control Act.

“Faithful execution of the law does not permit the president to substitute his own policies for those that Congress has enacted into law,” the GAO general counsel’s office wrote.

Speaker Nancy Pelosi quickly seized on that claim of a crime during her Thursday press conference.  “The OMB, the White House, the administration broke — I’m saying this — the law,” she argued, citing the GAO report as evidence.

The president’s legal defenders on Monday pushed back on the GAO’s argument, saying they disagreed with that opinion but declining to get into specifics about it for now.

“The GAO is an arm of Congress, and the views that it has taken over the years, oftentimes the executive branch disagrees with,” the source said.

Moreover, the source said, the claim that OMB, at Trump’s direction, violated the Impoundment Control Act was not included in the Democrats’ formal impeachment articles.

“We’re going to trial based on a specific set of charges spelled out in a charging document. The charging document doesn’t include anything about that GAO report. So in our view that’s not properly part of the accusations that have been brought to the Senate,” the source said.

House Democrats are expected to highlight the new GAO finding during the first days of the impeachment trial.

Responding to Trump’s legal brief denouncing articles of impeachment as “frivolous” and “dangerous,” the Pelosi-selected House impeachment managers once again accused Trump of a coverup by invoking executive privilege to deny documents the Democrats requested and prevent witnesses from testifying.

“Innocent people seek to bring truth to light. In contrast, President Trump has acted in a way that guilty people do when they are caught and fear the facts,” they wrote.

The actions Trump took to deny Ukraine security aid, they argued, were aimed at benefiting his own reelection, amounted to a clear abuse of power, and undermined his sworn duty to defend the country and uphold the Constitution.

President Trump was trying to “cheat in the next election and bury the evidence when he got caught,” the House managers wrote in a nine-page document released Monday. “He has acted in ways that prior presidents expressly disavowed, while injuring our national security and democracy. And he will persist in that misconduct — which he deems ‘perfect’ — unless he is removed from office.”