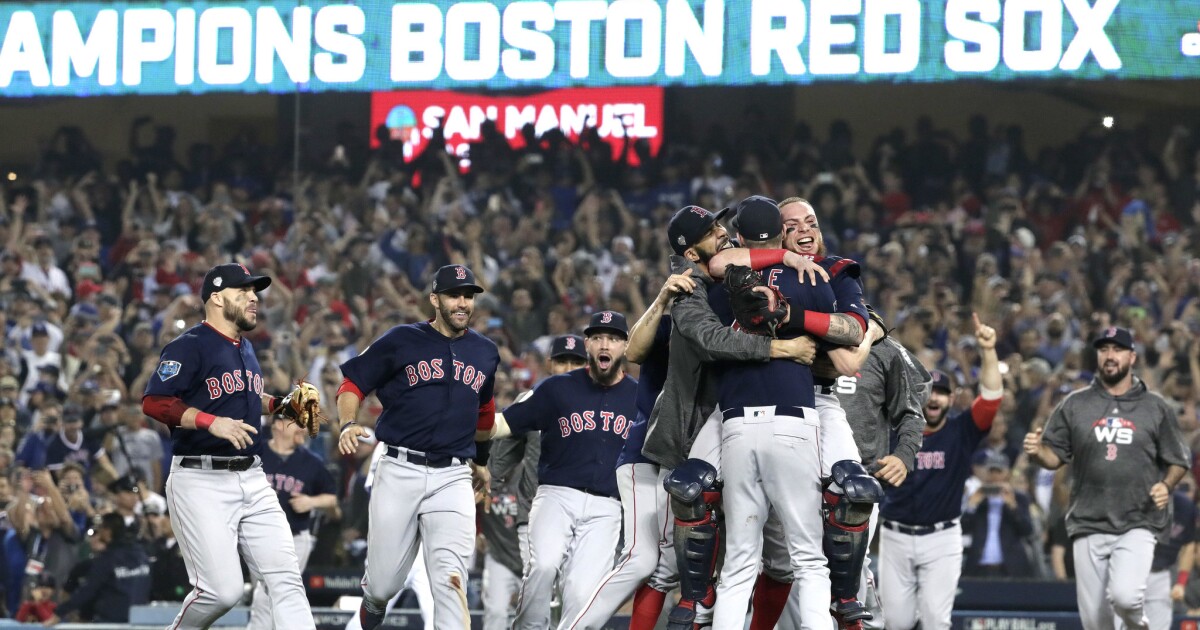 Remember those two heartbreaking World Series losses in 2017 and 2018 to the Houston Astros and Boston Red Sox? Of course you do, but finally, just before spring training sets everyone up for another year of disappointment, there’s good news.

You can stop crying in your $16 Dodgers beer, because we won both championships. Or so the Los Angeles City Council says.

By a unanimous tally, the council voted Tuesday to request that both championships be awarded to the Dodgers because their opponents were stealing signs.

This opens up an unlimited set of possibilities. Maybe the council can convince somebody that I was cheated out of the Nobel Peace Prize.

Come on, folks. Is this what we’re reduced to? A frivolous, meaningless declaration filled with whereases and therefores to pretend our boys in blue were winners?

“WHEREAS…the Astros put a camera in center field, stole the catcher’s signals to the opposing pitcher and then conveyed the signs to the batter by banging on a garbage can or sending texts” blah blah blah blah blah.

I will say, however, that this poses a test of character for local Dodgers die-hards, who have a lot to consider.

Can a self-respecting fan feel good about the prospect of a second-hand trophy? Come on, people. Even the guy in the TV car commercial, who gets his sister’s hand-me-down station wagon, has enough pride to say no way.

And if all it would have taken to win the crown was a clever bit of larceny, can Dodgers fans actually say they wouldn’t have been happy to take their cue from the Astros?

I mean, the Astros’ transgressions didn’t really cost them that much. They were fined a mere $5 million for their sins, they sacrificed a few draft picks and their manager and general manager got sacked.

That’s a bargain, right? The Dodgers pocketed more than $8 billion for a TV rights deal that meant millions of Southern Californians could no longer get the games on TV. The team could easily handle a $5 million fine for stealing a few signs and finally winning a title.

On the moral relativity scale, whose heart is darker? The Astros bosses who figured out how to cheat better than the other cheaters, or the Dodgers bosses who fattened their wallets but stiffed their fans and can’t even deliver a victory parade?

This is the sport with players who, not that long ago, grew muscles on their muscles.

The sport with players whose heads and rear ends doubled in size every couple of years.

The sport with pipsqueaks hitting baseballs over the moon while attempting to bunt, all thanks to performance-enhancing drugs.

And here’s the deal:

Team owners were in on the steroid scandal and the pooh-bahs of Major League baseball also knew exactly what was going on, but they all zipped their lips for years.

Because home run records and attendance records were shattered. The nightly missile launch spectacle was money in the bank, and greed was good even if it meant that the game’s all-time great heroes — Hank Aaron and Mickey Mantle, among others — were kicked to the curb while the juicers jacked.

These are the kinds of people we’re dealing with in the great American pasttime, so why would anyone assume it’s only the Astros and the Red Sox who stole signs?

When I asked councilmen Paul Koretz and Gil Cedillo if the Dodgers had suggested they introduce the resolution, the answer was no. It would look like sour grapes if the Dodgers took the lead, Koretz said, adding that someone had to take a stand against a growing culture of cheating in society.

This is the same city council that last month unanimously approved a law that limited campaign contributions from real estate developers but left watchdogs aghast at all the loopholes. Besides, the lightweight law — which won’t do much to change City Hall’s pay-to-play culture — doesn’t even go into effect for two years.

But I digress. Back to the topic at hand, isn’t it a little curious that the Dodgers’ administration and players haven’t made that big of a stink about the sign stealing scandal? And isn’t it just as curious that we haven’t heard all that much from the other teams in baseball?

If you’re wondering why, this might be of interest:

Sports Illustrated quoted sources who said “various Astros personnel told MLB investigators about eight other teams who used technology to steal signs in 2017 or 2018 — such was the culture of the time.”

Players get traded routinely. Are we to believe players traded from the Astros or Red Sox to other organizations didn’t tell their new teams how the scheme worked, so it could be copied?

When steroids were as common in baseball as bubble gum and chewing tobacco, a code of silence kept a lid on cheating for a long time. In the case of sign stealing, former Astros pitcher Mike Fiers broke the code and spilled the beans, for which he was chastised by Hall of Fame pitcher Pedro Martinez.

The Astros elevated the science of cheating, but Fiers is the one who broke the rules?

No doubt, there’s a clear advantage to a batter who knows what pitch is speeding his way. But the variables in baseball are many, and outcomes are determined by managing choices, by luck, by talent, by who performs best under pressure and by who comes through in the clutch, whether they know what pitches are coming or not.

When the vote was tallied Tuesday, Councilman Bob Blumenfield said he supported the proposal by Koretz and Cedillo but thought it went too far, and that the Dodgers need to “win it for real” next year rather than be given trophies with asterisks on them.

But on the off chance that Major League Baseball caves and awards the 2017 and 2018 championships to the Dodgers, meet me at the victory parade.

I’ll be the guy wearing a bag over his head and banging on a garbage can.