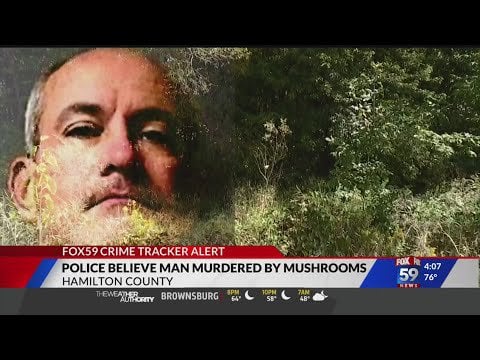 On April 24th, 2020, a woman walking along Overdorf Road in Hamilton County, Indiana discovered the body of a man lying in a roadside ditch.

The man was quickly identified as a local resident named David Fouts.

After questioning David’s wife, Katrina Fouts, they learned David had been missing for three days, however no one, including Katrina, had reported him missing.

However, aside from the small cuts on David’s hands, it appeared he had suffered no other injuries.

An autopsy revealed that David had consumed a large amount of mushrooms prior to his death. Police hoped a toxicology report would shine some light on how David died, however the test proved to be inconclusive.

The coroner believed the most likely cause of David’s death was the lethal dose of mushroom chunks found in his stomach, however it wasn’t until last week that his suspicions were confirmed.

After a nearly five month long investigation, police consulted a botanist at Purdue University who discovered that the particular mushroom found in David’s stomach contained a toxin called muscarine. The botanist noted that muscarine has a half-life of about eight hours and is usually undetectable by seventy two hours.

Prosecutors have said that they discovered screen shots on Katrina’s cellphone of information about deadly mushrooms as well as DNA from Terry that was found on David’s shirt. It was noted that Katrina’s cell phone records indicated she did not attempt to contact David at all in the three days he was “missing.”

A motive for David’s murder has not yet been discovered.