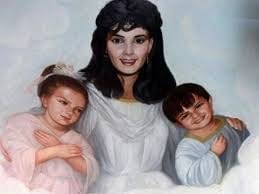 Guadalupe Leija Serrano, also known as Lupita, was a doting mother to Nataly and Hector, and the beautiful wife of Mexican drug lord, Hector Palma. Palma, along with his good friend Joaquin “El Chapo” Guzman, were the co-founders of the Sinaloa Cartel. Their innovative methods of smuggling drugs, particularly through tunnels, made them one of the most powerful drug-trafficking organizations in the world.

In the late 1980s they worked under the orders of Felix Gallardo, known as “The Godfather” or the “Boss of Bosses”. When Gallardo was arrested in 1989 he divided his drug trafficking territories into different factions. Most notably, the Tijuana cartel, led by his cousins, the Felix-Arellano brothers, and the Sinaloa cartel, led by Palma and El Chapo. This partnership was going well until a large shipment of cocaine went missing. Gallardo grew suspicious and hired Rafael Clavel to infiltrate Palma’s organization, the Sinaloa Cartel.

Rafael, described as a “charming” Venezuelan, started a romantic relationship with Palma’s sister. This helped Rafael gain Palma’s trust and Palma even thought of him as a cuñado, or brother-in-law. However, in 1989 Rafael seduced Lupita (Palma’s wife) and convinced her to run away with him to San Francisco. Lupita withdrew $7 million dollars from her husband’s bank account and ran off with Rafael, bringing her children with. Shortly after arriving at their San Francisco hotel room, Rafael murdered Lupita and beheaded her. He placed her severed head inside a cooler and shipped it to her husband, Hector Palma.

About two weeks later, Rafael took the children to Venezuela, where he threw 4-year-old Nataly and 5-year-old Hector off a 492-foot bridge, named Puente la Concordia. A heartbreaking video of the small children being tossed to their deaths was also sent to Palma.

Rafael continued to work for Felix Gallardo and the Tijuana Cartel. The brutal murder of Palma’s young family led to a slew of revenge killings. Bloodthirsty and filled with revenge, Palma retaliated by ordering the killings of Rafael’s three children and Gallardo’s lawyer. Also, Rafael was arrested and killed in prison at Palma’s request.

Although beheading is a brutal act often attributed with Mexican cartels, Lupita’s manner of death was unprecedented and one of the first instances of beheading in the narco community. Furthermore, the murder of Hector Palma’s wife and children shattered the unwritten narco code of families being off-limits, and a full on war erupted between the Sinaloa and Tijuana cartels.

Lupita and her children are buried at the Jardines Del Humaya cemetery in the outskirts of Culiacán, in the Mexican state of Sinaloa. A prestigious cemetery known for its grandiose mausoleums and final resting place of many rich and powerful narco families. The ceiling of the Palma family’s $400k mausoleum is adorned with a painting of Lupita, Nataly and Hector depicted as angels in Heaven.

Hector Palma was arrested on June 23, 1995, when his private plane crashed. He was extradited to the U.S. where he pleaded guilty to drug trafficking charges and sentenced to 16 years. In 2016, he was deported back to Mexico and was arrested upon his arrival. 79-year-old Hector Palma is incarcerated at the Altiplano Prison, near Mexico City. The same maximum-security prison that “El Chapo” famously escaped from, through a tunnel in 2016.

Painting of Guadalupe, Nataly and Hector